Dr. Doppler's Laboratory, shortened to Doppler's Lab and also known as the Doppler Stages (ドップラーステージス, Doppurā Sutējisu) is the final set of stages in Mega Man X3. It is Dr. Doppler's secret laboratory, located at Point D of Dopple Town.

After the defeat of the eight Maverick bosses, Doppler's fortress appears seemingly from underground. It is the residence of Dr. Doppler.

The first stage, which appears to be a disposal facility and prison where captured Reploids are kept. According to Zero, there is an army of powerful Mavericks in Dr. Doppler's lab and they've been modified by Dr. Doppler into war machines. Along with some powerful enemies, this stage features several deadly hazards including spiked ceilings, wall crushers, and spiked ball dispensers. X can also find a hidden Light Capsule that contains the Hyper Chip in this stage.

The second stage is set deeper within the lab.  Depending on whether or not Vile MK-II was killed before unlocking Doppler's Lab, this stage will appear either in pristine condition and full of strong enemies or completely ravaged and only populated by low-level enemies. A comparison on this can be seen on the right. There's also a section that's either filled with or devoid of water, again depending on whether or not Vile MK-II is still alive. Case in point, if Vile is already destroyed, that section will be filled with water. It's also possible for X to obtain the Z-Saber here by having Zero fight and defeat Mosquitus (which only appears if Vile MK-II was killed), only for it to crashland on Zero who then gives X the saber.

The third stage, set in the core of Dr. Doppler's lab.  It features the rematch fights against the eight Mavericks, followed by the battle with Dr. Doppler himself. After Doppler's defeat, he reveals that he created a powerful body for Sigma and tells X to hurry and destroy it before it is occupied by Sigma.

The final stage, set in the underground hangar where Dr. Doppler built a new body for Sigma, with several bodies visible in the background.  Like several final stages, this one consists of a short corridor with some enemies that leads up to the battle with Sigma. 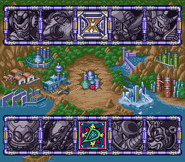 The Doppler's lab in the center of Dopple Town

Doppler's lab destroyed
Add a photo to this gallery 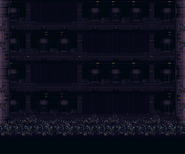 Underground hangar
Add a photo to this gallery

Doppler Stage B map (with Vile) 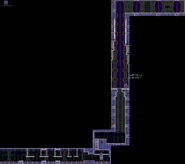 Doppler Stage D map
Add a photo to this gallery
Retrieved from "https://megaman.fandom.com/wiki/Dr._Doppler%27s_Laboratory?oldid=311712"
Community content is available under CC-BY-SA unless otherwise noted.