Dr. Goodall appears for the first time in WAZA HQ together with Ace. She assist Geo and Ace in recovering Luna Platz after she was destroyed by Dread Joker and dispersed into EM waves. Goodall later "revives" Luna after Dark Phantom's attack on WAZA's main computer.

Later in the game, she is captured in a Noise Wave which was fired by Meteor G's Dread Lazer controlled by Mr. King. She was later found and recovered by Mega Man in Noise Wave 3. Afterwards, together with the Satella Police's Chief and with the support of Woddy and Lee, she figures out a strategy to stop Meteor G.

During the credits, she is seen together with Ace, Acid and Queen Tia in a hospital.

When speaking, she has an unintentional habit of getting side-tracked, as displayed numerous times. Usually, it happens when a different subject presents itself by accident, such as Geo sleeping in when she called him, prompting her to talk about how nice it is to sleep in, something that she can't do due to age. Usually Ace (or whoever is present, like Geo or Omega-Xis) are able to get her to focus when it happens. Despite that quirk, she's a brilliant mind, able to perform almost miraculous acts and skilled strategies when needed, such as the aforementioned Luna incident, although as Ace mentioned, she has had just as many failures as successes.

In the prologue, Harp Note is kidnapped by ClockMan.EXE (a NetNavi able to travel through time by creating warp holes), who escapes to the Mega Man Battle Network era 200 years in the past. Dr. Goodall prepares a warp hole to allow Mega Man to follow him, and warns him that he can only return to his time if he finds ClockMan. 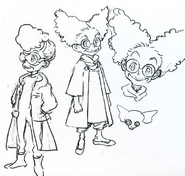