MMKB
Register
Don't have an account?
Sign In
Advertisement
in: Articles in need of expansion, Mega Man series locations
English

Dr. Light's Laboratory (Ｄｒ．ライト研究所, Dr. Raito Kenkyuusho), also known as Dr. Light's Research Laboratory, is the complex that serves as the home of Dr. Light and his family of robots, including Mega Man, Roll, Auto, Rush, Eddie, Beat, and Tango. It has also served as the birthplace for many other robots created by Dr. Light, including Proto Man and the industrial Robot Masters from the first Mega Man game. Others have been sent here for repairs, including Bass in Mega Man 7 and Duo in Mega Man 8, and it was from here that Bass stole the plans for the Super Adapter. The lab appears as a shop in Mega Man IV, Mega Man V, Mega Man 8 to Mega Man 11, and Rockman & Forte: Mirai Kara no Chōsensha. The lab is also briefly mentioned in The Journal of Dr. Cain when it is discovered by Dr. Cain and housing X.

Dr. Light's lab is usually represented by a single image in the different games that it appears in, varying in appearance. Some have had it in the city, others have the laboratory situated out in the countryside, one location being the United States Midwest/West. One game, Mega Man 8, implied from the map screen that it was located near Denver, Colorado. In either case, the laboratory is usually depicted as a futuristic looking building with a blue roof and technology embedded into the walls, located in a small village far from the city.[1] There is usually a red mailbox in front of the house as well. The inside of the lab is usually characterized by metallic walls and one or several large computers and monitors. The size of the lab is never fully revealed, as it is usually only represented by a single room in most games.

Dr. Light's Laboratory is usually acts as a shop for items and parts, which first appeared in the Mega Man IV.

Note: The Weapon Gauge Recovery ability will only be necessary once Mega Man reaches the last 4 Robot Masters, which are the four Robot Masters from Mega Man 5.

Note: The Power Generator becomes available for free by collecting the 4 crystals in the stages of Jupiter, Saturn, Pluto and Uranus.

The Power Shield through Step Booster parts are available right away, while the Energy Saver through Exchanger parts which are located on the second screen of the shop are only available after completing the mid-level stage of fighting Duo.

Due to the limited number of Bolts, Item purchases are limited and no more than eight parts can be purchased. Additionally, excluding the Exit part, all parts can be considered as general power-ups for Mega Man which can improve his abilities. For the Shot parts, they can replace Mega Man's original second-level Charge Shot if chosen in the menu during gameplay.

Note: Despite being listed here, the shops accessed by Proto Man and Bass aren't in Dr. Light's laboratory, but unknown locations run by ????? and Reggae, respectively.

Not all the items are available at the beginning of the game and require different methods to unlock. Each time a new item is unlocked, Dr. Light states that he made a new breakthrough.

In Newcomer Mode, the amount of Beat Calls, Pierce Protectors, and Super Guards are unlimited, and the Energy Balancer is also part of Mega Man's standard equipment. As such, this negates the need to purchase any of these items along with the 1-Ups in the Shop during this Mode.

In Ruby-Spears' Mega Man animated series, Dr. Wily was Dr. Light's assistant and worked in the laboratory with him before his betrayal of Light and the theft and reprogramming of the Robot Masters. Dr. Light's lab is located in New York, near New York City. Dr. Light's lab also appears in other comics and manga, such as the manga Mega Man Megamix, Mega Man Gigamix and Rockman & Forte.

In Archie Comics' Mega Man comic book series, Light Labs is the home of Dr. Light and his creations. When Mega Man is out fighting against Wily's robots, Dr. Light assists him from the laboratory. As revealed in issue 36, Light Labs also contained at least one large below-ground floor accessible via elevator, used for the creation of large-scale projects such as Gamma. The upper portion of Light Labs was later destroyed by Doc Robot in issue 45, but Dr. Light's financial situation was such that he was able to rebuild in short order, though at the cost of setting back some of his other projects. 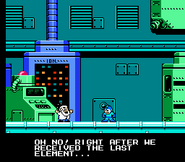 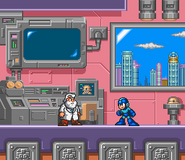 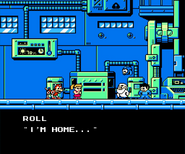 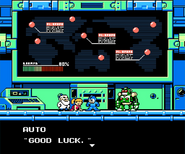 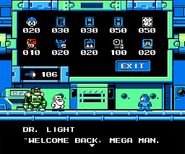 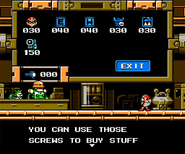 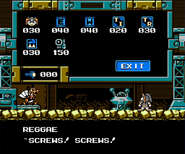 Dr. Light's laboratory, as it appeared on the Mega Man animated series. 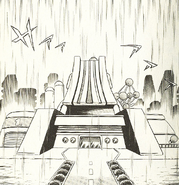 Inside Dr. Light's lab in the Rockman & Forte manga.

Auto's room in the Rockman & Forte manga, with some changes by Dr. Wily. 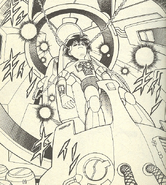 Mega Man being repaired in the lab in the Rockman & Forte manga.

Dr. Light's lab in a story from Capcom Design Works illustrated by Sakura.

The ruins of Light Labs in 21XX, in the Archie Comics Mega Man series.