Dr. Psyche is a member of the Rebellion Forces and is very interested in the evolutionary capabilities of Reploids. He was an old research partner of Professor Gaudile and urged him to join the Rebellion forces as well. Dr. Psyche eventually hunted down his old colleague to wrest the Force Metal Generator device he had created and was confronted by Mega Man X's command team in doing so. Dr. Psyche is crazed and power-hungry, as well as very likely insane. He makes long, almost ridiculous movements with almost every sentence he speaks, making him a fairly comical character. He is also extremely arrogant and considers others inferior to himself due to his superior intellect.

Upon his defeat at X's hands, Dr. Psyche separates his head from his body and attaches it to a large, nautilus inspired body dubbed Mad Nautilus, this being the part of the battle where the traditional "WARNING!" text flashes across the screen in-game. But, despite his protective shield, Mad Nautilus was eventually defeated by X and his party.

In battle, Dr. Psyche always begins by summoning Needles to aid him and will summon more when they are destroyed. While Needles are present, he will attack by firing twin laser blasts from the two small guns holstered at his sides (Doom Blaster) and by throwing an assortment of random objects, which can affect player stats (4-D Throw).

Mad Nautilus (マッドノーチラス, Maddo Nōchirasu) is Dr. Psyche's second form. In this form, he takes on the appearance of a mechanical nautilus and has a powerful shield that automatically counters any attacks performed on it. Eventually, the shield will drop as he charges up for the attack, Mad Ecstasy, allowing for the Hunters to attack without retaliation for a bit.

Mad Nautilus is encountered again in the Far East HQ, along with other revived/recreated members of the Rebellion Army. 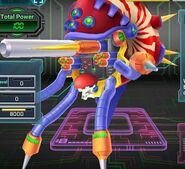 Retrieved from "https://megaman.fandom.com/wiki/Dr._Psyche?oldid=336518"
Community content is available under CC-BY-SA unless otherwise noted.