"Don't get me wrong. I shall create a world of utter evil."
—Dr. Regal

Prior to being revealed as the true leader of Nebula and responsible for other crimes, he appeared to be a scientist wanting to help save the world from an asteroid.

However, in reality, Regal is an utterly remorseless man who exploits the darkness within humankind while he weaponizes them into Dark Chips, and has shown to be genuinely uncaring of those who used them who suffered corruption due to his actions. Also, he uses the SoulNet in an attempt to create a truly evil world by using Nebula Gray, with neither respect nor care for anyone, human or NetNavi.

Unlike Dr. Wily, Regal is truly and purely evil to the point that even Wily was disgusted of his character, and forces him to redeem himself by using the SoulNet to erase his memories of a decade or longer, rather than by Regal's choice of becoming a good person.

Dr. Regal is the son of Dr. Wily. It is suggested that Regal was raised in a rather normal way and was in fact a good person for most of his life until his father turned evil. As hinted in later games, near 10 or so years before the main setting, is where Regal changed for the worse (interestingly enough, this is close to the time Lan and Hub Hikari were born). As this happened he began making preparations to turn the world into one of pure evil.

In the games, Regal is the leader of the Dark Chip Syndicate Nebula. In Mega Man Battle Network 4, he is introduced as one of the world's top scientists, yet hailing from the military state of Nation Z. He is reluctantly suggested and hired by Yuichiro Hikari to prevent the advent of an asteroid headed for Earth. He reveals, however, that he is actually the criminal mastermind behind Nebula and the spread of the Dark Chips, addictive Battle Chips that provide NetNavis with extreme augmentation in strength, but at the cost of their personality data, and walks out on the project shortly thereafter. Regal's plan was to alert the program Duo of the evil that existed on Earth and then stop the program with his Navi, LaserMan, to look like a hero. When Lan and his partner MegaMan successfully eliminate the threat of the asteroid, Regal attempts to commit suicide via jumping off the top of a tower, much to the shock and dismay of Lan, Chaud, and Dr. Hikari.

In Mega Man Battle Network 5, Regal, who is revealed to have survived his suicide attempt, returns to once again lead Nebula and kidnaps Dr. Hikari at the beginning of the game with the intent of setting up the SoulNet as Regal had inherited the SoulNet's design, but lacked the records necessary to complete it found on the Hikari Report. He creates a program known as Nebula Gray and begins corrupting the net through the actions of his Darkloid servants. As his plans draw closer to a close, Regal activates the server to feed Nebula Gray the dark thoughts of humans, and explains that the creature originated from the dark soul of humankind, which he placed into the computer system as data. It was through this process that the Dark Chips were made; aspects of Nebula Gray's programming were grafted onto them, resulting in an amplification of the darkness within the Navis that use them. Again, his machinations are foiled by Lan and MegaMan when MegaMan reverts to human form as Hub and releases a blast, destroying Nebula Gray and the Dark Chips for good. At the end of Battle Network 5, Regal has his memories of the last ten years erased by his father Dr. Wily with the help of the SoulNet's power, and he begins a new life as a genuinely law-abiding individual working for Science Labs.

In the MegaMan NT Warrior anime series, Dr. Regal is a scientist from Kingland and a worldwide authority in the field of "Super Energy". Much like his video game counterpart, he serves as both the leader of Nebula and the main antagonist for the second half of NT Warrior’s second season Axess. Though it appeared that Dr. Regal was defeated in Axess, he would later resurface as the main antagonist of the movie Rockman.EXE: Hikari to Yami no Program where he reveals he had become Nebula Gray. He returns once again in the second half of Stream where he tries to take control of Duo's technology. Despite seemingly succeeding at first, Duo detects Dr. Regal and kills him, ending the insane scientist's terror once and for all. The Cross Fusion Members find his remains on the way to face Duo.

Dr. Regal first appears in volume 10 of the Mega Man NT Warrior manga series as the weapon development director for the country Netopia. Later on, it is discovered that Dr. Regal is behind the Darkloids in the Netopia Net Army and he desire to have MegaMan's power Double Soul ability to fuse with Bass, so that Nebula Gray can gain their power and become unstoppable. After Nebula Gray is defeated by Bass Cross MegaMan, it fuses with CosmoMan and started to consume Bass to regain its power. MegaMan, in an attempt to save Bass, calls forth a new power with his Double Soul ability, Beast Out (which is coincidently almost identical to Double Soul) MegaMan, and deletes Nebula Gray. After Nebula Gray's defeat, Bass shows up on the computer of Dr. Regal's submarine and blows up the submarine, killing Dr. Regal in the process. 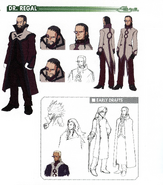