"There's no use! After inheriting Duo's DNA and gaining control of his advance technology, I have become a god! I can manipulate space and time at my will! What!?"
―Dr. Regal, madly declaring he has become a god before Duo kills him, Rockman.EXE Stream

Dr. Regal (Dr.リーガル, Dokutā Rīgaru) is a major recurring villain in the MegaMan NT Warrior anime series. He is the adopted child of Mr. Wily alongside Ms. Yuri, and was made into a probe for Duo at the age of 15 along with her after a plane crash that only the two survived 20 years before the start of the series, making him roughly 35. He is the NetOp of LaserMan, and when merged with him becomes Cross Fusion LaserMan (クロスフュージョンレーザーマン, Kurosu Fyūjon Rēzāman).

In Axess, he is the over-all villain of the season, working behind the scenes as the leader of Nebula with the Darkloid leader ShadeMan to bring terror to the net before he reveals himself and his true ambitions. He is the main antagonist of the movie Rockman.EXE: Hikari to Yami no Program where he becomes the cybernetic monster Nebula Gray (ネビュラグレイ, Nebyura Gurei), and is the main villain in the second half of Stream.

Dr. Regal is a psychotic and dangerous man, zealously causing terror and chaos to both the real and cyber worlds using Dark Chips and uncontrolled destruction in an attempt to bring the world to its knees. After his first defeat, Regal became a cybernetic being, and entered into Spectrum becoming Nebula Gray, attempting to use the Tadashi Hikari and Wily Programs to evolve into an even stronger being and absorb the net. However, upon his second defeat and creating Dark Rockman, Dr. Regal shifts his focus on taking however Duo's technology to become a god.

No matter what his ambition, Dr. Regal pursues his goals with a crazed focus, willing to cause great harm to others to get what he wants (such as torturing Yuichiro Hikari for the Tadashi Hikari Program) and destroys anyone who gets in his way. Though one would think this was due to his raising by Dr. Wily, the mad scientist himself states that Regal has always been a sad man, hinting that Regal has always been like this.

Regal is a brilliant scientist, having created Dimensional Areas before Dr. Hikari and inventing the Dark Chips, and is also a skilled actor, as he was able to infiltrate the Science Labs as a calm and level headed man and work with Dr. Hikari and the others for a long period of time before being discovered.

In the MegaMan NT Warrior anime series, Dr. Regal is a scientist from Kingland and a worldwide authority in the field of "Super Energy". In the past, he was rescued from a plane crash by Duo, who selected him as a probe to monitor life on Earth, and was adopted by Wily.[1] At that time, he was experimented with and subjected to an intense brainwashing procedure, and isolated within Wily's island research facility.[2] Years later, while snooping around Dr. Wily's computers, he found out the data of Barrel's Crest of Duo that Wily had discovered and stored. He robbed that data along with copies of Wily's Dimensional Converter research and ran off with Ms. Yuri eleven years prior to Stream.

In Axess, he is requested by Dr. Hikari to look over a Dimensional Converter used by the Darkloids to substantiate in the real world which the Science Labs had managed to capture. He and Dr. Hikari knew each other since time ago, and Dr. Regal had built the energy system of the Dimensional Converters that SciLabs were experimenting with.

He masquerades under this false identity for some time, but is eventually recognized as the leader of Nebula, who has been collaborating with the Darkloids to cause terror and fear across the world and spread Dark Chips alongside his second-in-command, Ms. Yuri. Partway through the series, Regal's Navi, LaserMan, usurps the Darkloid throne and disposes of the former leader, ShadeMan, as he had become too distrustful of his pact with the human.

Nearing the end of Axess, Regal comes out of hiding in outer space while Ms. Yuri completes the final tasks required for his plan to be put into motion. He abducts Navis from NetCities across the world for use as fuel for his Dimensional Converters, and unveils Regal Tower, a skyscraper-like contraption that initiates a globe-wide Dimensional Area. Using a Dark Synchro Chip, he performs Cross Fusion and brutally deletes ShadeMan, who had returned to exact revenge on the treacherous human.[3] With several regular Synchro Chips stolen from SciLabs at the beginning of Axess, Regal then grows in size and attacks major cities around the world. He sets his sights on destroying SciLab, but is defeated by Lan and MegaMan in their Full Synchro formation and disappears (though it is implied that he dies in the Japanese version).

Regal resurfaces in the movie. After his defeat in Axess, Regal was thrown into the UraNet along with LaserMan, his body fragmented into bits of data. While there, he discovered the dormant Wily Program and merged with it to become Nebula Gray. As a side effect of the transformation, Regal gained the ability to secrete protoplasmic humanoids as his soldiers, but could no longer exist in the Real World without a Dimensional Area present, though Dimensional Converters remain freely accessible to him. He captures Forte and manipulates him to do his bidding, hoping to acquire the Tadashi Hikari Program from the Trinity Brain corporation, which would allow him to reach his final evolution. At this time, Regal also unleashes the Spectrum phenomenon to invert the Real World and Cyber World, with his goal being world destruction. He is again confronted by his foes and defeated, though they narrowly escape a black hole summoned by the villain in a last ditch effort to do away with them.

Regal emerges alive in the Past Tunnel during the second half of Stream and separates Rockman's Dark Soul from him to create Dark Rockman. Space-Time War He commands his new subordinate and Darkloid followers to obtain the Crest of Duo from the thirteen Cross Fusion members, and uses them in the final episode of Stream to gain access to Duo's Comet, despite Dark Rockman's deletion at the hands of Slur. With Duo's great technology finally in reach, Regal briefly takes on a Rokurokubi appearance and god-like powers, then attempts to destroy a C.F. Roll. However, he is killed by Duo by having his energy depleted. Toward a New Future

He appears in episode 47.

He appears in the final episode of Stream, where he attempts to take control of all of Duo’s technology and powers. Despite initially being successful, Duo simply kills him. His remains are found on Duo’s Comet by the Cross Fusion Members. 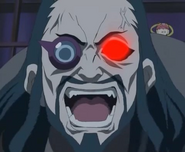 The end of Dr. Regal