Dr. Vega, known as Doctor Orihime (ドクター・オリヒメ, Dokutā Orihime) in Japan, is the primary antagonist of the Mega Man Star Force 2. She was a scientist from Tanabata Kingdom whose research led to the creation of Matter Waves, but she disappeared after discovering ruins of Mu.

Doctor Vega's designs for the continent of Mu revolved around restoring it to use its power to form the Neo Mu Empire. Those who proved themselves to be exceptional in some way would be allowed to become a citizen. However, her plan required the use of an OOPArt in order to raise Mu from the depths of the Bermuda Maze; which OOPArt she uses depends on the version of the game. To this end, she recruited Hyde to use and distribute UMA wave beings, and Solo, the last living person of Mu.

After Le Mu is defeated, it is revealed that her primary reason for reviving the Mu is to use its power to bring back her dead lover, Altair. He would sometimes refer to her as Vegalita (オリ, Ori), and is said to be the only person that Vega has ever formed a BrotherBand with. Altair had to leave Vega to fight in an unnamed war, from which he never returned. As a result, Vega became bitter and ultimately blamed the world for his death. She became a scientist and, after discovering the Mu, she vowed to enact revenge upon the world, leading to the events of the games.

Vega's first Matter Wave creation, Hollow, was made as a replacement for her lover. She hoped it would bring him back in spirit, but Hollow had neither Altair's personality nor memories. Only the image of Altair prevented Vega from destroying him. Hollow was her loyal follower, however, and Vega viewed him as such until he sacrificed himself to save her from Le Mu. Vega realized that then that she loved Hollow as well; not as Altair, but as his own person. After Hollow's demise, Vega allows Geo to bring her to justice but the latter decides to spare her for he knows that it's Altair's wish for her to live a happy and meaningful life.

In the anime, she is introduced as a famous researcher who is known for her writings on ancient civilizations as well as the invention of the Radio Composer that Shinsuke Utagai used when he was controlled by Cygnus. She recruited Subaru Hoshikawa (being able to figure out that he was really Rockman) into helping her hunt down the OOPArts, because she was worried of what would happen should Mu's "Ultimate Lifeform", Le Mu, be awakened. In reality, she wanted to awaken Le Mu and have it rule over the world as its god, eventually revealing this when she had Hollow take the Sword of Berserk from Rockman. In the end, she stayed behind on Mu rather than face imprisonment (as opposed to escaping in the game), leaving her final fate open to interpretation. 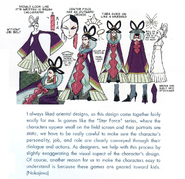 Concept art of Vega in the past.