The first stage from Dr. Wily's factory. Mega Man begins outside the base at daylight and uses Super Arm to open a path inside. The Magnet Beam is required in the first Mega Man game to pass from one area.

The second stage appears to be in a long open area above the base.

In Mega Man Powered Up this is the third Wily stage, and it takes place at night. The player has a rematch against the eight Robot Masters.

The third stage, a small vertical area followed by a long horizontal area filled with water.

In Mega Man Powered Up this is the second Wily stage.

The last stage. The area has several spikes, and many Guts Men can be seen in the walls. This stage has the only Yashichi in the entire game before the battle.

The Yashichi is not present in Mega Man Powered Up, possibly because the boss rematches were moved to the third stage.

Dr. Wily's fortress in other media related to the first game.

In Archie's Mega Man comic series, Dr. Wily's Robot Factory has the same appearance of the Wily Castle from Mega Man 2. It is a facility made of steel and concrete with a skull motif. It is enormous in size, cold, gloomy, and full of noise as many machines work to pump out robots of all imaginable shapes and sizes. The size and layout of the factory would allow it to be a veritable fortress in its own right, but rumor has it that Wily has been overseeing numerous renovations to the exterior of the plant, making it far less welcoming to guests than it had been in the past.[2]

When Dr. Light was analyzing the data Mega Man obtained from the Robot Masters in Let the Games Begin!, he discovers Wily is hiding in the factory that was used by both doctors to build Rock and the Robot Masters. Wily had fortified the factory, and it has a scrambling field up to avoid anyone from teleporting inside, so Mega Man must walk his way to the factory. After passing by Big Eyes and other robots, he uses Super Arm to open a path in the factory and is attacked by Yellow Devil. Mega Man defeats the Yellow Devil and is confronted by the Robot Masters. Mega Man tries to convince them to return to Dr. Light, and they fight against each other. Mega Man takes the opportunity to leave the room and proceeds until he falls in a trap where Dr. Wily creates a copy of him. Mega Man has trouble fighting against his copy as he has the same abilities of the original, but the Robot Masters reappear and destroy the Copy Robot, saying that Wily ordered them to destroy a Mega Man, and with that their mission was accomplished. Angry, Wily appears with a Wily Machine and says he will take care of Mega Man personally. Mega Man runs out of weapon energy during the battle, but he manages to destroy the machine and captures Wily, leaving the factory with the Robot Masters.

When Dr. Wily's escapes from jail in Time Keeps Slipping and kidnaps Roll, Mega Man, Cut Man and Ice Man search the factory to find clues of their whereabouts. They revisit the room Mega Man fought against the Copy Robot and the Wily Machine and find a new path. In the way they fight against CWU-01P, but they find nothing and leave the factory.

Dr. Wily's Twin Pyramids is a mobile fortress used by Dr. Wily to attack the city in the story "The Birth of Mega Man". When Mega Man defeats Elec Man with the Rolling Cutter, the fortress' reactor become unstable, and would cause a large explosion if not stopped. Elec Man reluctantly reveals he had to control the reactor's energy, and now it's out of control, but Mega Man could probably find something to stop it in the control room. Mega Man proceeds to the room and faces Bomb Man, Fire Man, Ice Man, and Guts Man in the way. In the control room, Mega Man is caught by the Yellow Devil, and Wily reveals himself. However, Mega Man breaks free of the Yellow Devil's grasp with the Super Arm, and tries to attack Wily, but his arm is sliced off by a mysterious robot covered in a robe. Seven other robots, all in robes appear, and Wily explains he didn't intentionally plan to use Light's robots to take over the world, but simply use them as a distraction to plan for his robots. Wily gets away, and the fortress is about to explode. But then, Dr. Light shows up, and shows him he managed to get his robots under his control again, and they manage to stop the unstable reactor, preventing its explosion.

Dr. Wily's base is a twin pyramid hidden in an area with trees near a city. After Bomb Man's defeat, Mega Man finds the base and uses Super Arm to go inside, facing several robots and hazards. After defeating the Yellow Devil in one pyramid, Mega Man goes outside and fights against Cut Man and Elec Man again, and a copy of himself. In the second pyramid he faces more dangers, such as CWU-01P, Bomb Man, Fire Man, Ice Man, and Guts Man, eventually reaching Dr. Wily. Dr. Wily uses the Wily Machine, but is easily defeated. After the battle, Mega Man talks with Dr. Wily and leaves the fortress.

Dr. Wily's Robot Manufacturing Plant in the background of the Japanese cover art from Mega Man. 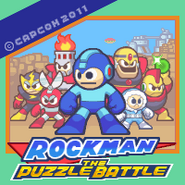 Dr. Wily's Robot Manufacturing Plant in Rockman The Puzzle Battle.
Add a photo to this gallery

Retrieved from "https://megaman.fandom.com/wiki/Dr._Wily%27s_Robot_Manufacturing_Plant?oldid=321121"
Community content is available under CC-BY-SA unless otherwise noted.