Draches fire two short bursts from their machine guns. When brought down, the Servbot piloting it will escape and flee on foot.

Draches are implied several times in the game, but the only Drache the player can interact in the game is used as a means to return to the Gesellschaft outside the Nakkai Ruins.

The Draches have been modified into Drache Kais, but still function as the previous version. They mainly appear in cutscenes of the game, specially the ones with the Sulphur-Bottom, but also appear as enemies in the Saul Kada Desert.

In the fighting game Tatsunoko vs. Capcom, Draches appear flying in the background of the Gesellschaft stage. They are also one of the objects that appears in Ryu's minigame.

A Drache, alongside the Flutter, made a cameo appearance in Issue 35 of the Archie Comics Mega Man comic series in The X-Factor Part 2. 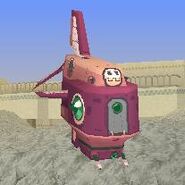 Concept art of Drache Kai from Mega Man Legends 2.
Add a photo to this gallery

Retrieved from "https://megaman.fandom.com/wiki/Drache?oldid=348628"
Community content is available under CC-BY-SA unless otherwise noted.