Dragalia Lost (ドラガリアロスト, Dragalia Lost) is an action role-playing game developed by Cygames and published by Nintendo that was released for Android and iOS on September 27, 2018. The game received mixed reviews from critics, but had grossed over US$50 million by the end of 2018. In the game's first anniversary, it was announced that a Mega Man collaboration would be held.[1]

The Mega Man event, titled "Mega Man: Chaos Protocol", was held in 2019 from November 28 to December 15. During the event, players could obtain Mega Man, Mega Man themed Wyrmprints, and weapons based on the Mega Buster, one for each type available in the game to allow any character to use Mega Man's buster. The event featured several elements from Mega Man 2, with the similar pose of the game's boxart in Mega Man's art, the appearance of Dr. Wily's Wily Machine 2 and his first set of Robot Masters, a prologue similar to the opening scene, and music from the title.

The Mega Man event is designed like a Stage Select Screen, with the stages of the five brainwashed Greatwyrms (Midgardsormr, Mercury, Brunhilda, Jupiter, and Zodiark) available in the Beginner difficulty. Besides the game's enemies, Metalls also appear as enemies in the stages. After defeating the five Greatwyrms, the Mega Man picture in the center will be replaced by Dr. Wily's mark, and the player will be able to challenge Wily Machine 2. After defeating Wily, a new difficulty is unlocked to the five dragons, and completing them unlocks Wily's next difficulty, repeating for each difficulty available (Beginner, Standard, Expert, Master, and Superhero).[2]

As there are only six stages, the remaining three selections contain the event's Story (which also includes Mega Man's Trial,[3] unlocked after clearing Wily Machine 2: Expert), Treasure Trade to exchange Bolts by treasures (such as event weapons and Wyrmprints), and the Endeavors from the home screen.

The year is 20XX. The brilliant but dastardly Dr. Wily has discovered and entered an interdimensional rift connecting his world and Grastaea.

With his sights set on total conquest of the land, he uses a brainwashing device to inspire chaos.

To save his home, a young prince of Alberia is forced into a bitter struggle with the five Greatwyrms, who have been reprogrammed by Dr. Wily's device.

But hope is not yet lost: A new ally follows through the rift, and lends his strength to the prince!

He is a super fighting robot dedicated to justice. He is...Mega Man!

Dr. Wily has surrended, and restored autonomy to the five Greatwyrms. Humiliated, he flees back to his world.

The combined efforts of the prince and Mega Man have saved Grastaea!

And so, their mission complete, Mega Man, Roll, and Dr. Light return home as well.

The heroes seal the rift connecting their worlds to prevent any evil from abusing it again.

But though they must part, they will never forget their friends from another world, or the peace they won together.

Mega Man is a Flame attribute adventurer. His moves are based on the Mega Man games, his normal attack being the Mega Buster, his force strike a Charge Shot, his dodge move a slide, teleporting in the beginning of the stage, and exploding when defeated. When Mega Man shapeshifts, instead of becoming the equipped dragon, he will call Rush and hop onto Rush Jet. While on Rush, Mega Man moves faster and fires in three directions, and he can use the skill Rush Buster.

Mega Man is given as a gift during the event, but to keep him after the event, the player must add him to the team and take him on quests to befriend him, making him a permanent member by maximizing the friendship gauge displayed on the event menu in the end of the stages he participated.

Notes: Stats are of adventurer without equipments and enhancements. Mega Man starts with level 10.

Additionally, the 4 "Wily Warriors" Wyrmprints can be placed side-by-side to form a larger picture. The non-unbinded picture is a square formed by Bubble & Wood and Air & Crash on top, while Metal & Quick and Flash & Heat are on the bottom. The unbinded picture is a panoramic formed with Bubble & Wood, Air & Crash, Metal & Quick, and Flash & Heat arranged left-to-right in that order. 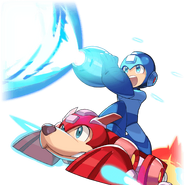 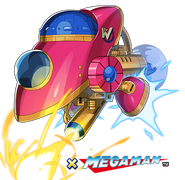 Mega Man using the Charge Shot.
Add a photo to this gallery

Retrieved from "https://megaman.fandom.com/wiki/Dragalia_Lost?oldid=307158"
Community content is available under CC-BY-SA unless otherwise noted.