Mega Man 11
Dread Spark (ドレッドスパーク, Dread Spark) is the sub-boss from Fuse Man's stage in Mega Man 11. It is a power generator robot that is responsible for distributing power across the power plant. During its battle, Dread Spark tries to electrocute Mega Man by shooting electric lasers from the ceiling.  Dread Spark also fires projectiles from its mouth and summons Elec Crossers. Its eyes are its only weak spot. Its weakness is Bounce Ball, but as it is also Fuse Man's weakness, Acid Barrier can be used as an alternative to quickly finish it off and save Bounce Ball's energy.

Dread Spark is a massive stationary robot with black and gray power cables dropping down from its head, giving them the appearance of dreadlocks. It also has orange sunglasses and light bulbs surrounding its forehead. Dark purple power strips hang down from Dread Spark's chin. Also, a cluster of electric coils stick out from the top of Dread Spark's head.

A robot that stays in the heart of the power relay station and delivers power wherever it's needed. Its dreadlock-like power cables combined with cool shades give it the unintended look of a reggae master.

Dread Spark appeared in the Rockman 11: Unmei no Haguruma!! manga. When Mega Man encounters Fuse Man, Fuse Man says that he must defeat Dread Spark before facing him. The Mega Buster isn't effective at first, but Mega Man is able to defeat it with the Power Gear. 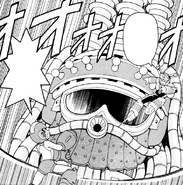 Rockman 11 manga
Add a photo to this gallery
Retrieved from "https://megaman.fandom.com/wiki/Dread_Spark?oldid=326114"
Community content is available under CC-BY-SA unless otherwise noted.