Drill Man (ドリルマン, Doriruman) is a Robot Master originally created by Dr. Cossack to dig in construction sites. When Dr. Wily forced Dr. Cossack to work for him, Drill Man was converted into a combat robot to fight against Mega Man in Mega Man 4, basing himself deep underground, in a mine shaft.

Like Crash Man, Needle Man, Fire Man, and Spark Man, with later ones including Napalm Man, Wave Man, Magma Man, Blade Man, and Commando Man, Drill Man has no hands. Instead, he has two powerful, all purpose drills made for grinding through solid rock and earth, which he incorporates into his attacking strategy- burrowing into the ground to avoid attacks, before leaping up from underground to ambush his foes. His Special Weapon, the Drill Bomb, is a powerful explosive with a built-in drill, launched from his arms to pierce into dense objects or armor, before detonating inside of them to cause the maximum possible damage.

Whilst Drill Man is diligent and a very hard worker, he can be dangerously haphazard at times- he dislikes doing calculations and planning ahead, and tends to rush his jobs whenever he gets bored. Despite often making dangerous mistakes such as damaging nearby gas pipes during his digging operations, he has a talent for finding things hidden underground- having received rewards for digging up hot springs and even a gold mine. His weakness is the Dive Missile, which can trace his heat signature and home in on him even when he's underground.

Drill Man is one of the eight bosses. He will start the fight by burrowing his way into the ground, chasing Mega Man and drilling under him after five seconds of being underground. The player should hold their fire when Drill Man is burrowing, as he is invincible during that time. The player must move from side to side of the screen so he misses the attack and is far enough for the player to shoot him. On the surface, he attacks by jumping where Mega Man is standing (which can be avoided by getting out of the way, best done by sliding), and by firing his Drill Bombs, which deflect all of Mega Man's attacks and can damage him if he is not careful enough. The player can avoid the Drill Bombs by simply jumping over them.

Drill Man's weakness is the Dive Missile, which will home in on him when he jumps, but not when he is underground, and it can also be deflected by his Drill Bombs and by his burrowing move. Still, it defeats him in ten hits.

Drill Man in one of the four bosses fought in the Wily Castle. His strategy is similar to Mega Man 4.

Translation: A construction site digging robot that was modified. He is an unpleasant enemy because he can dive in the ground.

Amount of damage in units that Drill Man receives from each Special Weapon in Mega Man 4.

Drill Man appeared in the episodes "The Big Shake", "Showdown At Red Gulch" and "Master of Disaster" from the Mega Man animated series. The only difference between his appearance in the show and his game counterpart is the increased size of his arms. He also had an action figure.

In the January 2017 teaser, he is seen battling against Mega Man (character)

The drills, and drill on his head are bigger, his feet are more cylinder shaped, has two additional drills on his shoulders, and his head is completely different, being black with a red mouth cover and having a different shaped.

Drill Man is a construction site worker robot that has drills built onto his head and the ends of his arms, which grants him greater stability while drilling underground. When faced with a solid rockbed, Drill Man will drill a hole and insert one of his Drill Bombs into the hole. By focusing the explosion on one point in this way, Drill Man is able to efficiently break through any obstruction. The timing of the explosion is controlled by a remote signal emitted from Drill Man himself. When Drill Man was modified for combat, both his external armor and the strength of his bombs were enhanced.

Drill Man first appeared in the story "The Grim Reaper of Resurrection", which happens after the events from Mega Man 4. Drill Man was captured by Skull Man and reprogrammed by Dr. Wily to fight against Mega Man and Dr. Cossack's remaining robots. He is defeated by Dive Man and later repaired by Bright Man.

Later, in Mega Man #34, Drill Man's eventual creation was alluded to during the expedition to the Lanfront Ruins. When Mega Man commented to Doctor Cossack that it would be helpful to have more digging Robot Masters like Quake Woman, the doctor stated his intentions to create one, but was cut off before he could name Drill Man. 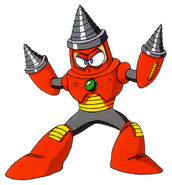 Front, side, and back view of Drill Man. 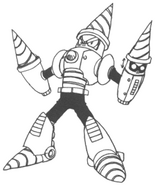 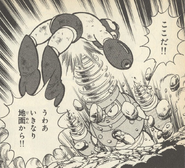 Drill Man in the Rockman 4 manga.

Retrieved from "https://megaman.fandom.com/wiki/Drill_Man?oldid=261403"
Community content is available under CC-BY-SA unless otherwise noted.