"This is a dropship--a ship my father designed years ago especially for landings in rough atmospheres! If we use this, we should be able to land on Forbidden Island! Gramps always told me never to build a dropship, but still, this is an emergency--I know he'll understand!"
—Roll Caskett

Dropship (ドロップシップ, Doroppushippu) is a small ship from the Mega Man Legends series created by Banner for landing in rough atmospheres. The ship's top has propellers that rotate at high speed to reduce the falling speed. The top also has a balloon to lift the ship, so the user can leave the area it landed.

The first Dropship was used to safely land on Forbidden Island, but Banner and his wife Matilda never returned from their travel. Ten years later in Mega Man Legends 2, their daughter Roll Caskett uses Banner's plans to create a second Dropship in an attempt to enter Forbidden Island and rescue her grandfather Barrell Caskett, as the ship he was inside, the Sulphur-Bottom, got stuck in the storm.

Roll and Mega Man Volnutt go to Calinca to buy parts for the Dropship in a Junk Shop, and there they discover that a man named Joe was building a Dropship. Believing that Joe knows her father, Roll goes after him. Joe's Dropship was nearly complete, and Maria's daughter tells them he went to the Abandoned Mine to find a Refractor to power the Dropship. Joe is injured by a Reaverbot, Jaiwan, but Mega Man and Roll rescue him. Joe says he can't help Roll as all he knows is that he was holding the blueprints for the Dropship when he was found with amnesia near the city ten years ago. Joe allows them to use his Dropship, which is taken to the Flutter's hanger and completed by Roll.

In Forbidden Island, Mega Man safely lands in the island with the Dropship, but the wind blows it off course and he has to walk through the storm. In the way he finds an old Dropship with a woman (Yuna) apparently sleeping inside. This red Dropship is assumed to be the same used by Banner and Matilda years ago.

Mega Man inside the Dropship.

Dropship returning to the Flutter.

Yuna's body inside a red Dropship.

Concept art of the red Dropship.

Concept art of the Dropship. 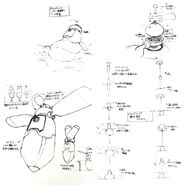 Concept art of the Dropship.

Dropship in Rockman DASH 2 4Koma Gag Battle.
Add a photo to this gallery

Retrieved from "https://megaman.fandom.com/wiki/Dropship?oldid=286927"
Community content is available under CC-BY-SA unless otherwise noted.