MMKB
Register
Don't have an account?
Sign In
Advertisement
in: Articles with hAudio microformats, Mega Man characters, Males,
and 14 more

Duo (デューオ, Dyūo) is a character from the original Mega Man series. He appears to be an extraterrestrial space police robot[1] with a strong sense of justice with the mission to eliminate the Evil Energy. His left hand glows to absorb and destroy the Evil Energy, and his head possessed a radar for detecting the precise location of Evil Energy.[2]

Mega Man 2: The Power Fighters was Duo's first appearance, though it takes place after Mega Man 8. He is the new fourth playable character in the game, likely added to promote Mega Man 8 which would be released later in the year. He arrived back at Earth due to Wily trying to misuse the stolen Alien Energy, causing Duo to refer to Wily as a "deplorable creature" in disgust.[3] His partner that he receives from Eddie is Beat.

In his ending, he leaves Earth holding the alien energy, departing from Dr. Light (and, if playing co-op, the other player's character). After this, a message will appear stating that his story would be revealed in Mega Man 8.

Mega Man 8 starts with Duo fighting in space against an unknown Evil Robot with Evil Energy. As they collide into each other, they fall towards Earth and the two crash on an island. Mega Man is sent by Dr. Light to investigate the island, where he finds, and takes the broken Duo to Dr. Light's Laboratory while Dr. Wily gets away with the Evil Energy. After Dr. Light starts to repair Duo, and after the defeat of the first four Robot Masters, Duo awakes and goes after the Evil Energy in Dr. Wily's hideout. There he finds, and fights against Mega Man thinking he wanted to interfere with his mission, before realizing that Mega Man had a strong sense of justice. He then joins forces with Mega Man, helping him against Dr. Wily, and later saving his life.

Duo is a secret playable character that isn't part of the story, being available only in the Versus and Time Attack modes. He drives the Hard Grandeur (ハードグランジャー, Hard Grandeur), a vehicle with normal acceleration and a maximum speed of 568 Km/h, the highest in the game. Hard Grandeur's Giga Fist Body is equipped with two large hands that are very powerful but have a short range. Its normal attack is Upper Through (アッパースルー, Upper Through), the large hands swiping opponents out of the way, launching them in the air a long distance. His charge attack is Giant Knuckle (ジャイアントナックル, Giant Knuckle), launching the hands forward a short distance for a powerful punch that makes opponents spin a while and is able to destroy any enemy in the courses with a single hit. Hard Grandeur's speed isn't reduced when going uphill, in dirt terrains, and by passing over mines.

Outside Japan, Duo is unlocked after obtaining all four hidden parts that appear after defeating the Black Troop members. In the original Japanese release Duo is unlocked only by loading a special save from a Memory Card given in a promotional event of the Dengeki PlayStation magazine, or using a cheat device. When starting the game with the save, a cutscene will introduce Duo and his machine, he replaces Bass in the opening race, and the message "デューオ登場" ("Duo Appears") is present in the title screen. In the Japanese PlayStation the Best for Family version, Duo is available from the beginning, the special cutscene and the promotion related symbols in the ending being absent.

As Duo isn't present in the Grand Prix Mode, the Hard Grandeur parts can't be obtained, and they can't be combined with other car parts even with cheats, apparently not being programmed to be compatible with them. There is no information of what each part does, besides the basic of each body being responsible for the two attacks, each engine for speed, and tires for terrain effects. The Maximum Wing presumably affects the speed.

Duo (迪歐, Duo misnamed "Dio" in the game) works in a space base orbiting Earth that is destroyed when Apollo and Luna arrive on the planet. Duo survives, but is injured and sends a signal to be rescued. He is intercepted by Cloud Man, Ice Man, and Guts Man in a sewer beneath Thailand, but is rescued by-and subsequently joins-Mega Man's team. His element is Wind.

Appearances in other games

Reploids based and named after Duo were planned to appear as a playable character type in the cancelled game Rockman Online.

Duo made a brief cameo in Mega Man #20 when he collapsed into the atmosphere during Mega Man's time traveling excursions, just prior to Bass finding an unidentified object responsible for the temporal imbalance.

He was also briefly mentioned in Sonic the Hedgehog #248 by Dr. Light, regarding contacting him upon discovering the readings of the Warp Ring energy from Proto Man, having witnessed it from a fight with the four Roboticized Masters.

He debuted in the comics in Sonic Universe #51, where he received Dr. Light's message and began making his way back to earth. In Sonic Universe #53 he arrives at Light Labs, while in Mega Man #27 he is transported to the Skull Egg Zone, where he quickly boards the Wily Egg. Once aboard, he finds Mega Man and Sonic the Hedgehog battling the Chaos Devil, and after sharing some of his strength with them engages it while they continue on. Duo managed to re-form the Chaos Devil into Chaos' 0 Form by the climax of the arc.

Issue 42 introduced a group of robots virtually identical in form to Duo known as the Star Marshals, who attacked the villainous Ra Moon and engaged the Stardroids in battle some 20,000 years before Mega Man's time. Unfortunately, one of their number by the name of Trio (the "Evil Robot" of Mega Man 8) turned against the others and sided with Ra Moon.

Duo crash lands onto Wily City in his original form, known as the "white giant", and single-handedly defeats the Wily Numbers from Mega Man 2, Mega Man 3, and Mega Man 7 as well as Bass, except for Shade Man and Shadow Man, and injures Dr. Wily. His reasoning for doing so is his ability to sense Wily's evil nature and his duty to destroy evil. Shade Man attempts to fly Wily to safety in the Hogale as the white giant takes pursuit and destroys it, but it turned out to be a decoy, with Shadow Man taking the real Wily across undersea in the Gamerizer. Later on, Mega Man and the Light Numbers attack and destroys the white giant-who fights them after they refuse to allow him to harm Dr. Wily-by taking advantage of a tiny chip in the back of his armor created when Quick Man attempted to hold him off earlier, but his destruction releases the Stardroids from within him in the process. Later on, he is rebuilt by Dr. Cossack, and then defeats Venus, but then he is warped into space by Saturn where he is ambushed by the other Stardroids and destroyed for good.

Duo is present near the 1996 banner just as Mega Man descended from the level above, with the 30th Icon containing the key art and footage for Mega Man 8 being in a narrow nook and cranny behind him. He briefly levitates before landing as Mega Man passes him by and uses the Slide maneuver to gain the 30th Icon. It should be noted that, unlike most of the other characters and the overall setting of the trailer, he does not appear in an 8-bit sprite representing him. Instead, he uses the sprite from Mega Man 8, his official debut in the classic Mega Man series (not counting The Power Fighters).

Duo appears in the manga Rockman 8 and Rockman Maniax.

Duo himself has greater strength than average robots. He has the ability to turn himself into a comet form to crush his opponents: he can also fly while in this form, enabling him to traverse great distances in outer space. He attacks primarily by punching using his large left hand to create shock waves, though he is capable of using projectile weapons, the most powerful of which is a blast in the shape of his own hand. Duo can also attack with Giga Tackle, a dash that hurt his enemies with the spikes on his shoulder. He has a radar equipped in his head for detecting energy signatures.[2] Having been created for the purpose of destroying evil energy, he seems to have the unique ability to purge said energy from an infected victim's body, as demonstrated when saving Mega Man in Mega Man 8. While saving Mega Man, he also showed a capability of reading dreams, when he claimed to see into Mega Man's mind and saw what he was dreaming about. According to Mega Man, it is believed that he has greater strength than is revealed, and purposely levels himself to avoid needless destruction.

In Mega Man 2: The Power Fighters, Duo has the ability to copy Special Weapons like Mega Man, Proto Man, and Bass. This ability is guessed to have been given to him by Dr. Light. His charge attack (Up + Shot with charged energy) is Giant Knuckle, where he gives the opponent a strong uppercut, follows by jumping near the opponent (Jump + Shot) and hitting again (Shot) in the air, making the target fall on the ground. 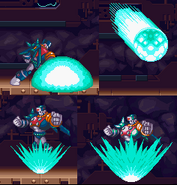 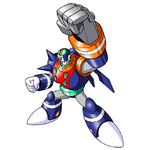 Duo's new design and armor from the cancelled Rockman Online.

Duo and the "Evil Robot" in the Rockman 8 manga.

Duo in the Rockman 8 manga. 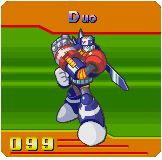