MMKB
Register
Don't have an account?
Sign In
Advertisement
in: Articles in need of citations, WWW, Gospel,
and 4 more

Mr. Dark is a mysterious, merciless, professional assassin who will do anything for money. He showed little sadness when ShadowMan was absorbed into the Dark Galaxy, and absolutely no remorse over any of his actions, no matter how horrible. Even though he can come off as cruel, he maintains some degree of honor when it comes to battles.

Although Dusk is never mentioned in the first game, residual data of his NetNavi, ShadowMan, emerges late in the game in the Internet Area 15, after MegaMan obtains 140 Battle Chips. Apparently, Dusk sent ShadowMan into that area of the Net long ago to infiltrate the World Three (WWW) on an unknown assignment, but broke it off around the time Lord Wily initiated his plans for world domination, at which point it became too difficult to keep a low profile.

Dusk only had a brief cameo in this game, appearing at the very end after the credits to inform ShadowMan about their new job with Gospel.

Dusk was hired by Sean Obihiro to destroy YumLand and then Electopia. He states that if he was given enough money he'd do anything they'd want him to, to which the Gospel Leader replied that he liked working with "pro assassins" like him (the word 'Assassins' was removed in the American release). It is later stated in Mega Man Battle Network 5, that very few members of Gospel in Battle Network 2 were even aware of his presence. Dark succeeds in his first mission in destroying YumLand's Cyberworld, but fails in his attempt to destroy the Mother Computer and leaves Gospel. Dark's quiet ties with Gospel allow him to remain unnoticed by the general public, and he slips away before Sean has a chance to punish him for his failure, and even before the officials catch on to his whereabouts. He disappears for a while to reconsider his methods, and has a very slight change of heart over time. It is later revealed in the ending of Battle Network 2 that some rogue minions of ShadowMan are deleted by MegaMan and ProtoMan, and YumLand's victims have been revived by backup data, including its leader, Cook.EXE.

Dusk resurfaces and joins Team Colonel to fight against Nebula. However, he first insists on testing Lan and leads him on wild games of tag throughout the Net, making him vacuum up all the clouds. After the test, Dusk joins the team and helps them defeat CloudMan. In End City, he challenges Lan and MegaMan for the SoulNet server even though Dusk wasn't under its influence. He participates in the raid against Nebula's base and loses ShadowMan to the Dark Galaxy, but later gets him back when he returns to help MegaMan. After the battle was successful, he leaves Team Colonel, stating that he hoped they wouldn't be enemies in the future. And, so far, that hasn't happened.

Dusk was mentioned as being the master of Dark Scyth. Dark Scyth claims he taught him his dark art of deleting Navis using his experience in the Undernet.

Miyabi first appears in episode 36 of Rockman.EXE Stream, saving Rockman.EXE and Netto Hikari from Dark Rockman's Darkloids. However, he would later try to kill the two after being hired by Tesla Magnets. Despite this, the world itself seemed protect Netto and Miyabi would later ally with him against Duo.EXE, and would fight alongside with him later in the series. 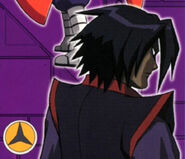 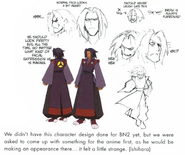