"You can't retire me no matter how hard you try... I'll give you a little advice... You... Sigma... Everybody is always too hot when they fight. But not me. I am the coolest and wisest of all. If you can't understand, then I'll just have to show you. Come on and fight me!"
―Dynamo, Mega Man X5

Dynamo (ダイナモ, Dainamo) is a character from the Mega Man X series that first appeared in Mega Man X5; he was hired by Sigma to scatter a virus inside the abandoned space colony Eurasia and prepare it to crash into the Earth. He also reappears as a secret boss in Mega Man X6 as a rogue agent seeking to benefit off the Nightmare.

Dynamo is a tall Reploid equipped with dark blue armor with yellow and white highlights. His helmet has two prongs on the top with green gemstones, making it reminiscent of a Western cowboy hat, and a red visor covers his eyes. He has long, silver-blue hair that flows out the back of his helmet. He can turn his arms into busters and also wields beam swords, which he keeps on a utility belt.

He is very casual, treating the Maverick Hunters like opponents rather than adversaries and playing their battles as if they were for sport. He dislikes how angry and "hot" Sigma and the Maverick Hunters get in the heat of battle, believing that staying cool and collected is the best way to fight. Although he claims total allegiance to Sigma in Mega Man X5, he doesn't seem to have anything personal against the Hunters, only fighting them because it's his job. His running away may seem to indicate cowardice, but it also signifies intelligence - other foes that X and Zero faced have died, being unwilling to run away even when things looked slim for their victory. Dynamo was smart enough to live to fight another day, being one of the few Mega Man X antagonists to survive the events of his first appearance. Dynamo also shows to have no issue risking the safety or well-being of others. This is clearly seen when he set the space colony Eurasia on a crash-course to Earth under Sigma's orders, which resulted in massive damage worldwide. He is shown to be malicious and seems to enjoy causing havoc as shown in his dialogue, asking Sigma to let him make the Colony fall, as he was getting bored, later saying all he had to do was to scatter the Virus on Earth. This amused Sigma, who stated "You're exactly what I expected".

Dynamo was a very skilled mercenary and fighter, having the combat skills of an SA-Class Hunter.[1] He was hired by Sigma to help the execution of his master plan. Dynamo personally set the Eurasia colony on a crash course with Earth as part of this plan. Once Sigma had executed his own part of the plan, spreading the Sigma Virus over the Earth, Dynamo's job was to slow down the progress of X and Zero as they gathered parts for the Enigma cannon and the Shuttle, both of which were intended to stop the colony's crash.

Dynamo appears as a boss twice, challenging the Maverick Hunters in their own Hunter Base. He is fought near the Enigma after defeating a total of two Mavericks, and later near the Shuttle after defeating a total of six Mavericks. The battles against him are skipped if Eurasia crashes before his appearance. Despite his arrogant claims, he turns tail and runs after both of his defeats when X and Zero bring his life into jeopardy.

With Sigma no longer around to protect him during Mega Man X6, he tried gathering the Nightmare Souls to enhance his power. Dynamo appears as a secret boss in the Nightmare areas after defeating both Zero Nightmare and High Max, and unlocking Gate's Lab. The pre-battle dialogue in the game shows that he is interested in the power of the Nightmare Souls and how they can make him strong enough to defeat X and Zero.

However, he still fails miserably at fighting X and Zero, and always ran away to fight again. Ever since the resolution of the Nightmare incident, he hasn't appeared since and is assumed missing.

Dynamo can always be fought every time the player visits any of the Nightmare areas, allowing the player to quickly farm Nightmare Souls. Being struck by Rainy Turtloid's Meteor Rain or Ensuizan can cause him to be stunned and a follow-up hit from it makes him drop 200 Nightmare Souls, for a maximum of 600 per fight.

Some of these quotes are only present in the Japanese version of Mega Man X5*.

Dynamo was revived by Sigma-1 as part of his Maverick Army during Worlds Unite, and joined in the attack on the Sky Patrol. However, he was one of the Mavericks to run afoul of the newly arriving Street Fighter heroes, suffering a devastating blow from Ken Masters that impressed Knuckles the Echidna and being destroyed by a double Tatsumaki from Ryu and Ken.

Dynamo is the only Reploid from Sigma's army whose fate was unknown in the games. Although killed during Worlds Unite, his ultimate fate remains unknown as most events from the crossover where undone by Xander Payne.

Illustration of Dynamo by Iwamoto Yoshihiro. 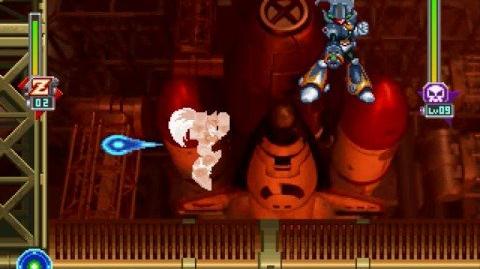 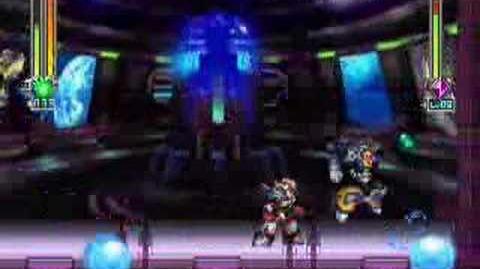 Developer Comments
"This time, on top of the story, one of the main themes is the destruction of Earth and ****, so I felt there was less necessity for new characters and rival characters than there'd been to date. However, I thought it'd be lonely without ANY rivals, and thus Dynamo was born. To make him stand out, I set my sights on a character that hadn't been in the series before. He's halfhearted in personality, so he doesn't know if he wants to fight or not. It's not that he hates X or Zero; he fights because it's his job. He may appear irresponsible at first glance, but in fact, he's an adult of the late 20th century, philosophically viewing X and company, who give free rein to their enthusiasm when they fight. I also quite like him design-wise. It feels like an explosion of Sensei's design sense. Please treat my dear Dynamo well." (grin) [2][3]

Designer Comments
"Established as a character who uses both a buster and a saber, the American cavalry flickers across his face. We settled on him being a rival for X and company even as we expanded on all sorts of ideas about what kind of past he has. His red visor is a high point of his design." -Haruki Suetsugu [2][3]

"Since Dynamo uses both a sword and a gun, I modeled him after mounted cavalry and other western movie sources. His buster is shaped like the cylinder of a revolver, his color is navy blue, he has yellow lines going up either side of his legs, and he has a buckle on his belt. Also, since he is able to use both kinds of weapons, I also gave him some features from both X and Zero." -Haruki Suetsugu, Mega Man X Official Complete Works, 2009 [4]