"Be my friend as in old times."
—Dynamo Man, Mega Man & Bass database

Dynamo Man (ダイナモマン, Dainamoman) is one of the Robot Masters from Mega Man & Bass. He is encountered in a power plant.

Dynamo Man used to be a robot guide for schoolchildren on field trips through a power plant before his entry into King's army. When King modified him, Dynamo Man was given a power generator that created a powerful electric field around him. This affected his programming (as the power output was too much for his circuits to handle), and he was deemed unsafe for his job. As a result, people avoided him, and Dynamo Man became resentful of their avoidance, as he saw nothing wrong. Dynamo Man's main characteristic is that he can charge himself up with electricity to attack and refill his energy column. In addition to this, he also likes to use his Lightning Bolt Special Weapon to overwhelm and defeat his opponents on sight. His stage is unlocked by defeating Astro Man.

Although he can be doubtful and even incredulous at times, Dynamo Man is honest and straightforward. He enjoys having a private power generator, as it allows him to work as hard as he wants and stay fully charged, but he regrets that it has hampered his social interactions.

Frequently throughout the course of the match, Dynamo Man will dash back and forth across the room. He will also shoot out slow moving electric tendrils at different heights at the player, which must be avoided by jumping over them or sliding under them. Players using Bass have the option of destroying them (the one at about middle height can only be hit by Bass when the player shoots diagonally upwards in Dynamo Man's direction), but Mega Man lacks the fire rate to destroy them unless players are very quick.

Dynamo Man can also create a ring of three electric balls around himself, which will orbit for some time before either being thrown at the player or sent into the ceiling (both outcomes will happen, so be prepared). Dynamo Man will then do his introductory move while attacking the player with his Lightning Bolt. This attack is very difficult to dodge as it covers the entire screen, so it is recommended to use Copy Vision to have Dynamo Man target the clone with the spheres before they are sent into the ceiling. Dynamo Man is also invulnerable while summoning Lightning Bolts, so the incentive to use Copy Vision is even greater. The number of Lightning Bolts he summons is equal to the number of electric orbs he sent into the ceiling beforehand, so keep track of the count.

Dynamo Man's last combat move is to jump to the other side of the room, leaving a "rainbow" of six electric spheres in his wake. These spheres will launch themselves at the player, one at a time, in no particular order. Again, Copy Vision clones can absorb the spheres to prevent the player from taking damage while at the same time pelting Dynamo Man with shots (he is not invincible during this time like he is in the previously mentioned move and will not try to regenerate himself until all the spheres have attacked).

Occasionally, Dynamo Man will jump up on a platform with electrodes on the sides that drops down in the middle of the room. He can charge himself with these, and it will restore his health (2HP per second with both electrodes attached, half that if only one is attached). To stop this attack, the player must destroy each side, but beware of standing under Dynamo Man as Bass, since he will drop directly down and possibly land on them. Wave Burner and the Copy Vision are the most effective weapons to destroy the generators quickly, the Copy Vision for its ability to attack both generators at once, and the Wave Burner for its sheer damage output against a single generator. The Bass Buster's upward-aiming abilities can also target both generators effectively.

Astro Man's Copy Vision is Dynamo Man's weakness, and producing a copy will cause Dynamo Man's electric spheres (for either his Lightning Bolt or "rainbow" move) to target the clone instead of the player. However, because the clone only shoots in one direction and uses a large amount of energy, some may find using the Mega Buster/Bass Buster to be easier, especially if one has the double-damage upgrade for Bass or the high-speed charge for Mega Man.

Amount of damage in units that Dynamo Man receives from each Special Weapon in Mega Man & Bass.

Dynamo Man appears in the Worlds Collide crossover event as part of the army of Robot Masters assembled to fight Mega Man, Sonic the Hedgehog, and their allies. 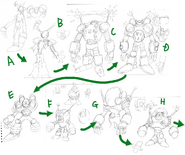 Concept art of Dynamo Man, then known as "Coil Man". 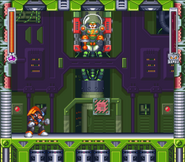 Dynamo Man in his charger.