Eddie (エディ, Edi), also known as Eddy and Flip-Top, is an item transportation robot within the Mega Man series. He made his first appearance in Mega Man 4.

Eddie was created by Dr. Light to carry items for Mega Man. (According to U.S. game manuals, Dr. Light built him as his personal cybernetic suitcase.) He is equipped with a material transfer unit that allows him to relay an unlimited amount of items from Dr. Light's Laboratory, but as Dr. Wily (using Dr. Cossack) attacked while he was still under construction, Eddie is sent incomplete to assist Mega Man in the battle and is unable to choose items, giving them randomly. Like Rush, Eddie is equipped with a sensor that identifies Mega Man's exact location. The sensor allows him to appear by Mega Man’s side instantly whenever he is needed.[1] He has a jet engine that allows him to fly, while in Mega Man 11 he flies with a propeller.

From Mega Man 4 to Mega Man 6 and Mega Man III to Mega Man V, Eddie appears in a section of some stages to help Mega Man, giving a random recovery item, much like a ? Can or an Item Present. Items dropped by Eddie will not disappear until they are taken. If the item isn't taken and the player is able to leave and return to the area with Eddie, Eddie will reappear and give other item, allowing the player to select the item.

In Mega Man 5, for some reason, Eddie could not be retrieved after the events from the fourth game, but he still functions and reappears to assist Mega Man.[2]

In Mega Man 8, Eddie is one of the assistants that can appear to help Mega Man in the Rush Jet sections from Tengu Man's stage and the second Wily Tower stage. He attacks by throwing bombs from his head.

In Mega Man 2: The Power Fighters, if the player loses half of his energy during a battle, Eddie appears to give an item that calls a support robot. Rush will appear when the item is taken by Mega Man, Treble appears for Bass, and Beat for Proto Man or Duo.

In Mega Man & Bass, Rockman & Forte: Mirai Kara no Chōsensha, Mega Man 9, Mega Man 10, and Mega Man 11, Eddie can be bought as an item by Mega Man in the item shop, called Eddie Call (エディコール, Eddie Call) in such games. He costs 150, 150, 50 and 10 Screws, respectively. When the item is used, Eddie will appear and drop many healing items for Mega Man to pick up. This version works exactly as Rush Question from Mega Man 8.

Translation: An item-carrying robot developed by Dr. Right in preparation for the battle against Dr. Wily. Dr. Wily attacked just as the development was about to finish, so the robot was deployed without being completed.

Eddie has several appearances in Ruby Spear's Mega Man animated series, where he was voiced by Scott McNeil. His main role is to give Energy Cans to Mega Man when his energy is low, being able to store up to five of them in his head at once. In the cartoon, Eddie's color scheme was changed from red to green and he also received a small height increase in addition to a more conical-shaped head.

Eddie is a video game character that comes out from the TV a few times to help Mega Man recover.

Eddie first appeared in one panel from issue 20. In the Worlds Collide crossover he supplied Mega Man with a replacement chip for his Mega Buster (as Sonic had used his super-speed to steal the chip from him to disable his weapon), as well as an Energy Tank to refill his reserves before resuming his match with Sonic in his dimension.

Eddie eventually made his formal debut in issue 37, where he was seen being worked on by Auto while Dr. Wily was privately admitting that he was luring Mega Man and company into a trap. Eddie is completed and activated in issue 53, just in time to assist Mega Man against Dr. Cossack and his robots.

Eddie only appeared in two panels, the first being inside Dr. Light's limousine in the first issue, and the second being worked on by Dr. Light in the fourth issue, where Light mentions that the robot will be able to "make the finest coffee this side of Seattle".

Eddie doesn't have an active role in the manga, usually only having minor appearances. He was created by Dr. Light as an item transport robot to assist Mega Man, but as he was rushed out to assist him in a time of need, his Item Selection function is not as refined as it could have been. Still, Eddie manages to play an important role outside of battle as well by acting as a rice cooker for Dr. Light's household. He transmitted to Dr. Light the events that Tango observed in "The Strongest Enemy to Date", Light not knowing who sent the footage.

Eddie appears under the 1992 banner, where he provides Mega Man with a 30th Icon containing key art and footage for Mega Man 5.

Eddie also appeared in the Rockman manga series, Rockman 8, Rockman & Forte, and Rockman 4Koma Dai Koushin. In most of those, Eddie has a very small role or a brief appearance, the shortest being in only one panel from the Rockman & Forte manga, where Roll uses him as a rice cooker. 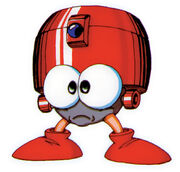 Front, side, and back view of Eddie.

Eddie in the Mega Man 4 US manual.

Eddie with Mega Man, Rush, and Beat in Mega Man 6. 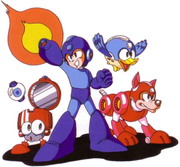 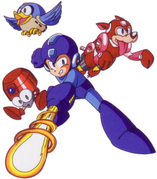 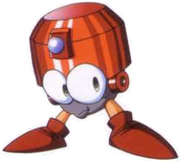 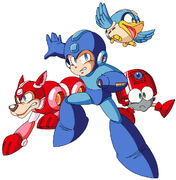 Eddie with Mega Man, Rush, and Beat in Mega Man 9. 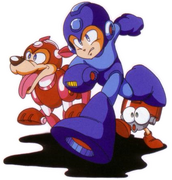 Eddie with Mega Man and Rush in Mega Man III.

Eddie in Mega Man: Upon a Star. 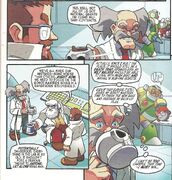 Eddie in the Rockman 6 manga. 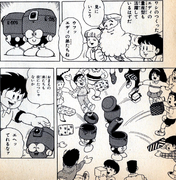 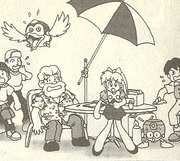 Eddie in the Rockman 8 manga. 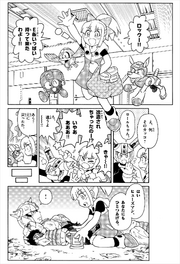 Eddie in the Rockman 11: Unmei no Haguruma!! manga