Keiko Yokozawa (voice from Eden)
Eden (エデン, Eden) is a mysterious giant space fortress from the Mega Man Legends series with a powerful weapon and around 10,000 workers aboard.

Near the end of Mega Man Legends, the bureaucratic model MegaMan Juno activates Eden to initiate the reinitialization program in Kattelox Island and eliminate all Carbons (humans) in the island, Juno estimating that they can complete their work in less than five minutes. Mega Man Volnutt appears and tries to stop Juno, which keeps him occupied until Eden is in range to receive transmissions. Juno is defeated, but he manages to keep Mega Man Volnutt occupied long enough to Eden achieve optimal altitude, and requests Eden to begin the reinitialization of the island and create a memory back-up of his systems, being backed up in Eden's central core. When Eden is ready to start the reinitialization program, Data appears and requests Eden to interrupt the program and delete Juno's back-up data, passing to Mega Man Volnutt the bureaucratic authority for the district. Eden follows Data's orders and resumes standby mode, returning to its previous coordinates.

In the end of Chapter 43 of the non-canon crossover Namco × Capcom, Juno got the Eye of Atamoni in Dycroft to use its energy on Eden, giving it enough power to dispose all Carbons on the planet. In Chapter 44, the party goes to Eden with the Gesellschaft to recover the Eye of Atamoni and stop Juno and the Grandmaster Meio. In the Eden's Control Room, the party fights against some Gnosis (KOS-MOS using the Hilbert Effect to the party fight against them) and a Gorubesshu, and more enemies appear later, including Juno, the Grandmaster, and Saya, which reveals their plans. Juno and the others are destroyed in the battle, and the party uses the Control Room to send Eden and everything inside it, including the Eye of Atamoni, deep into space to never be seen again. They return to Earth thinking the battle is over, but Saya survived and hides in the Gesellschaft, fighting against them in the last chapter.

Enemies in Chapter 44, in the Eden's Control Room. 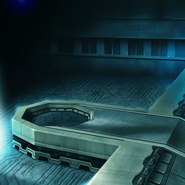 Eden's interior in Namco × Capcom.
Add a photo to this gallery

Retrieved from "https://megaman.fandom.com/wiki/Eden?oldid=312158"
Community content is available under CC-BY-SA unless otherwise noted.