The Egg-Wily Machine X is a robot built by the combined efforts of Dr. Wily and Dr. Eggman during the events of the Worlds Collide storyline. It appears at the climax of the crossover.

Visually and fittingly, the Egg-Wily Machine X is a combination of two of the doctor's prior robots. The skull head, tail and part of the feet come from Wily Machine 9 while the main body, mustache and arms are repurposed from Eggman's Death Egg Robot.

Armaments include egg-shaped explosives (two varieties), multiple lasers (including a large one in the mouth), spiked fists that can detach and launch themselves at targets, high-yield rocket boosters, heavy armor, and a high-voltage forcefield.

They secretly sabotaged the other's defense systems as a means of treachery. However, this eventually backfired on them later on when they were fighting Knuckles and Proto Man. However, the two managed to put aside their differences long enough to tell each other how to reverse the sabotage just in time to regenerate the battle mecha to full power. Unfortunately for them, the distraction had provided Sonic the Hedgehog and Mega Man enough time to reach the Chaos Emeralds and undergo their respective Super transformations.

Faced with the invincible Super Sonic and Super Armor Mega Man, the doctors attempted to put up a fight by launching everything in their arsenal, and for a while it seemed as if they might succeed in delaying the heroes long enough for the Super Genesis Wave to complete its work. However, the two heroes combined their abilities in the Super Sonic Shot and destroyed the Egg-Wily Machine X.

Remains of the Egg-Wily Machine X ended up in Sonic's world on the Efrika Plains along with Dr. Eggman, Orbot and Cubot. (Sonic the Hedgehog #252) 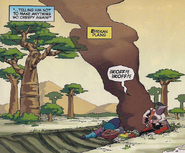 Egg-Wily Machine X's remains.
Add a photo to this gallery

Retrieved from "https://megaman.fandom.com/wiki/Egg-Wily_Machine_X?oldid=294150"
Community content is available under CC-BY-SA unless otherwise noted.