Elec Man is a character from the TV show Mega Man: Fully Charged. He first appears in the episode Power Cycle. He is voiced by Andrew McNee, who also voices Drill Man.

He is very hyperactive, talks fast and very quirky. He seems to have a craving for absorbing electricity and takes great pride in his speed. However, if given the opportunity, he can be quite manipulative, as he tricked Mega Man into believing that he was trapped in a cycle of villainy and that he wanted to be a hero instead.

Elec Man can absorb electricity as well as shoot it at his enemies. The more electricity he absorbs, the faster he's able to move. In Change the Charge, Elec Man pretends to reform, when really, he's fooling Mega Man due to the fact that he had a personality defect due to the Ice Man schematics. He and Mega Man ended up sticking outlets everywhere that shoot out hypnotic projectiles. Lord Obsidian hypnotizes all of the robots in Silicon City, ordering them to destroy humans.

Absorbing electricity also makes Elec Man become more hyperactive and erratic, meaning he could potentially overload himself if he absorbs too much. It's also possible to suck the electricity out of him if, when he's siphoning electricity from an electrical device, the flow of electricity is reversed. If he leaves himself plugged in long enough, his energy will completely drain, as shown at the end of his first episode, Power Cycle. Elec Man also becomes helpless if his legs are frozen, as he is unable to run around so quickly. 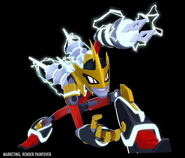 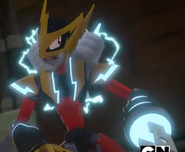 Elec Man, along with all the other characters, in the opening of Mega Man: Fully Charged.

Mega Man after copying his schematics. 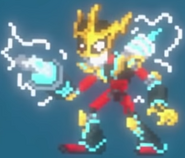