Mega Man 11
Electriri, known as Elec Telly (エレキテリー, Ereki Terī) in Japan, is a variation of Telly that appears as an enemy in Fuse Man's stage in Mega Man 11. It resembles a floating plug that moves slowly across the stage, attempting to damage Mega Man while surrounded by an electrical field. Electriris have cylindrical bodies like their non-electrical counterparts but have yellow bodies and a plug coming out of the top of their body.

A transformer station guard robot that can wreathe itself in electricity and bash into intruders. Individual units are not much of a threat, but in greater numbers, they can unleash real power. 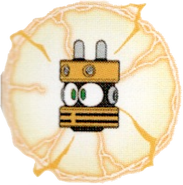