In most games that Proto Man is present, a small portion from this music is whistled by him when he is about to appear. This tune is also played by Dark Man 4 in Mega Man 5, but in a different way.

In the Mega Man comic book series by Archie Comics, Proto Man made the tune himself, while in the manga Mega Man Gigamix this is a melody that Proto Man heard and liked. In the Rockman 5 manga and Rockman Battle & Chase manhua, Proto Man uses a flute instead of whistling.

Proto Man using a flute in the Rockman 5 manga. 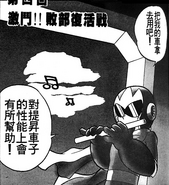 Proto Man using a flute in the Rockman Battle & Chase manhua.
Add a photo to this gallery

Retrieved from "https://megaman.fandom.com/wiki/Ending_(Rockman_3)?oldid=286660"
Community content is available under CC-BY-SA unless otherwise noted.