Enker (エンカー, Enkā) was the first robot from the "Mega Man Killer" series built by Dr. Wily, the only purpose of which is to destroy Mega Man. In Mega Man: Dr. Wily's Revenge, he appears after the second set of Robot Masters is defeated. His Mirror Buster allows him to absorb shots into his spear (called the Barrier Spear) and fire them back at Mega Man as either small buster shots or large waves, depending on the amount of shots taken.

Enker also appeared in Mega Man V, as a card in RockBoard, and as a playable character in Mega Man's Soccer, being the antepenultimate boss of the Capcom Championship mode. He reappears as one of the bosses from the downloadable Special Stages in Mega Man 10, alongside Punk and Ballade.

Enker's only real interest is to destroy Mega Man and not much else beyond that, leaving him with a very cold and gloomy personality. Being a robot built with a Japanese theme, however, he is a profound individual with a strong Japanese spirit, and a liking for New Year's Eve. However, his cold nature makes him somewhat anti-social, and causes him to hang back in the shadows, away from others.

Enker can be difficult to fight, as he is only weak to the Mega Buster. While fighting him, Enker raises his spear to use his Mirror Buster, absorbing attacks used against him to increase the power, speed, and range of his attack. The player has to shoot at him as much as necessary to damage him, then jump above the mirror beam he shoots from his spear to avoid it. After the attack, he will move to the other side of the room by running, jumping twice, or doing one jump to the center and then running. He then repeats this pattern.

Enker is fought inside the Wily Star.

Enker attacks just as he did in Mega Man: Dr. Wily's Revenge, but now he can be finished faster if the player has the CL enhancement for the Mega Arm, as the player can fully charge the Mega Arm and when it is shot, it will hit Enker and deal up to five units of damage, and then shoot him repeatedly with uncharged shots, making the result seven or eight.

Enker inherits the same attacks in this game, too, but he now moves faster than he did in his previous appearances. The Mirror Buster has also become stronger and charges faster, and he occasionally stops in the center of the room. For the first time ever, Enker has also gained a weakness to a Special Weapon: the Ballade Cracker. It defeats him in ten shots.

The Enker Card (エンカーカード, Enker Card) is a Boss Card that can only be used when the player is targeted by another Boss Card. When used, Enker will appear to protect the player by using the Mirror Buster to reflect the Boss Card's effect back to its user.

Enker is a player balanced player with the fifth-highest running speed. His special is the Mirror Buster Shoot (ミラーバスターシュート, Mirā Basutā Shūto). After defeating eight teams in the Capcom Championship mode, Mega Man will face a team of eight Enkers in a field from the Wily Castle. When defeated, one Enker joins Mega Man's team.

In Tournament mode, Enker's team is formed by 3 Enkers, Bubble Man, Flash Man, Gemini Man, Top Man, and Snake Man. Enker has no team in League mode, but he appears as a member of the Cut Man, Fire Man, Wood Man, and Pharaoh Man teams.

Displays the amount of damage in units that Enker will receive from each Special Weapon in Mega Man: Dr. Wily's Revenge, Mega Man V, and Mega Man 10.

*Enker's Japanese quote refers to an exclamation uttered by a character who is about to be killed in a kabuki play.

Enker makes appearance in the beginning of Rock of Ages, where he is tasked, alongside the other Mega Man Killers, to act as the final defense until Wily comes back from the future just as Mega Man arrives at the Chronos Institute. He and the other Killers also appeared during the Worlds Collide crossover arc, in which they appear to challenge Mega Man, Sonic the Hedgehog, Tails, and Rush aboard the Wily Egg. Enker proved a formidable opponent, but was ultimately destroyed by his own teammate Punk after Sonic tricked the spinning Robot in pursuing him right through Enker.

Although Enker doesn't appear in the main stories from issue 18, he does make a brief cameo appearance in its Short Circuits section, alongside Quint, Proto Man, and a very impatient Bass, waiting to appear in the comic.

Mega Man faces Enker inside a submarine. The battle is tough, but Mega Man manages to injure Enker. Enker talks with Mega Man and reveals that he is working for Proto Man (later revealed to be a fake). Although injured, Enker attempts to attack again and Mega Man tells him to stop, having no choice but to shoot him down.

Enker appears in the short stories Arigatou Rockman and Ballade & Enker no Onore Rockman. In Arigatou Rockman, Enker and Ballade accidentally step on chewing gum and Mega Man helps Enker clean his foot by rubbing it on Ballade's foot. Later, Ballade steps on poop and Enker laughs of him. Ballade gets angry and tries to clean it on Enker. When Mega Man appears, Enker is disgusted with the dirt on him and Ballade desperately shows his foot to Mega Man, who helps to clean it by shooting Ballade several times. Enker thanks Mega Man and says he will not blame him if Ballade is reduced to very small pieces, Mega Man replying with "Roger" as he continues shooting.

In Onore Rockman, Ballade and Enker attempt to trick Mega Man, but their plans fail. First, Ballade uses a Pickelman-like disguise and Enker disguises himself as Roll. Ballade pretends to attack Enker, and Mega Man blasts him to save "her". Next, Ballade disguises himself as a shopkeeper and sells Mega Man a disgusting can of oil, which he gives as a gift to "Roll" (Enker). While planning what to do next, they notice Mega Man approaching and Ballade pushes Enker (disguised as Roll) into the road for Mega Man to save, but Mega Man doesn't notice them and Enker is run over by Sisi Truck.

In one of the shorts, Wily orders Enker to go after Mega Man and he engages Beat in combat, believing the bird is his target.

After the main character defeats the Bit Benders, who were controlling the four bosses in the Wily Castle, he proceeds to face Enker. For his surprise, Enker is being controlled by his brother Shō, who has fallen into BUG's control again. Shō uses Enker's weapon (a sword in the manga) to defeat his brother with a single attack. 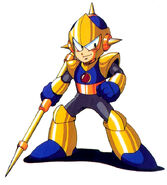 Front, side, and back view of Enker. 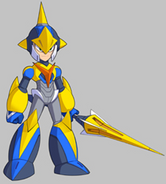 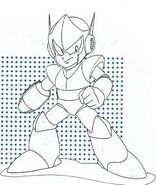 Enker in the Short Circuits from Mega Man #18. 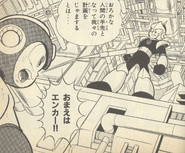 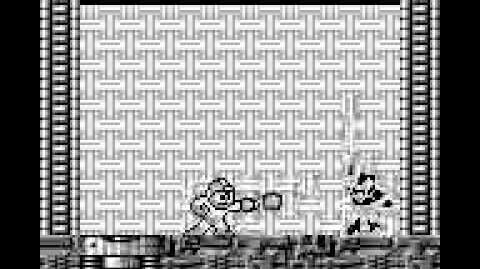 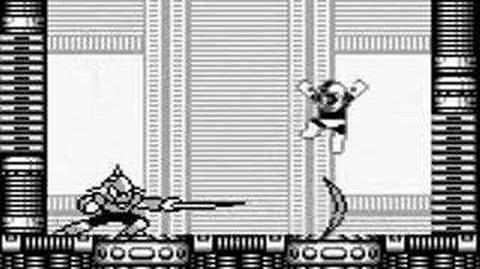 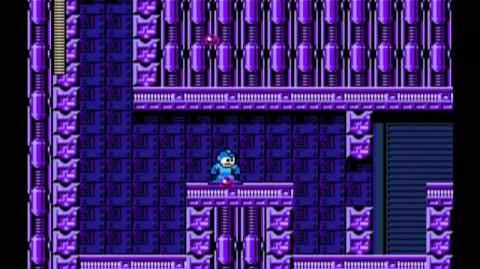