"If you expect defeat, that is what you will get..."
—Eugene Chaud, Mega Man Battle Network 6

Eugene Chaud, known as Enzan Ijuin (伊集院炎山, Ijūin Enzan) in Japan, is an Official NetBattler and the operator of ProtoMan.EXE. Chaud is extremely skilled due to the fact that he spends much of his time training with ProtoMan (about 10 hours a day). Despite his mature mannerism, he is 11 years old in the first game, the same age as Lan Hikari [2].

Chaud has sky blue eyes and straight, white-and-black hair that hangs down over his forehead. His upper attire consists of a red sleeveless jacket over a black long-sleeved shirt with yellow collar and lower half. His lower attire consists of long pants with a green camouflage pattern and pair of black shoes.

Chaud is usually serious and speaks realistically. He chooses not to have friends because he enjoys his solitude. If presented with a task, he will handle it with great determination. However, in MegaMan NT Warrior Axess, he sees Lan as a good partner and friend and begins to open up.

In the manga, he's less serious, easily getting emotional that usually shown when someone mocks him either directly or indirectly that ends up with him taking out his frustration on the person, particularly Sean and Lan, both which shown in rather humorous manner.

While initially being aloof, he eventually comes to accept his friendship with Lan after he saved him from DarkMan, PlantMan, and DrillMan. He is often very close to his NetNavi due to their training, which is presented on a more personal level in the later parts of the anime.

Chaud is the son of IPC's (BlazeQuest in the English anime) president Shuuseki Ijuin, and the operator of ProtoMan.EXE. His mother died while he was still young, and Chaud was forced into becoming the vice-president of his father's corporation, a position which contributed to his initial cold attitude towards Lan Hikari. As the series progresses, he gains more respect for Lan, and also begins to open up to others, smiling more often. He does not, however, lose his serious outlook during battle, nor does he act impulsively before thinking.

In the games, Chaud is an Official NetBattler, who meets Lan while investigating a water shortage caused by WWW. He was introduced as a ruthless operator who took his job seriously and would delete any NetNavi who got in the way, and originally saw Lan as a pest, but slowly begins to respect him. Though the same age as Lan, Chaud has progressed much more quickly through his education, and by the sixth game, he's already a college student. The ending of the sixth game also reveals that he grows up to become a worldwide leader of International Officials (IPC's president in the Japanese version).

In the anime, Chaud retains his personality from the game, though his respectful side develops much more quickly than in the aforementioned medium. He is the victor of the first series' N1 Grand Prix, defeating his opponents in mere seconds.

Chaud's Japanese name, Enzan, translates to "flame mountain". This reference was translated in his English name through "Chaud," a French word meaning "hot". The anime followed suit by adding in the unique surname of "Blaze". Furthermore, being a French word, "Chaud" is supposed to be pronounced with a silent "D," but it is incorrectly pronounced. In the English games, Chaud is the character's family name, though he is only referred to as Eugene during his introduction of himself in the first game. The anime changes Chaud to being his given name. 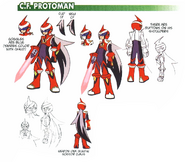 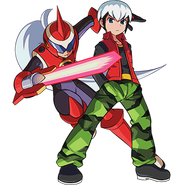 Chaud and ProtoMan in Dragon Poker