"This is what you people call 'evil energy.' According to the studies I've done so far, the one who obtained the original energy must be a being of complete evil. This kind of energy absorbs the evil in a person's mind and then multiplies. Judging by the quick rate of its growth, it'll take over the planet with evil energy in a matter of days! We must stop it!"
―Duo, Mega Man 8

Evil Energy (悪のエネルギー, Aku no Enerugī) is a mysterious sentient energy source of alien origin that appeared in Mega Man 8. Usually, it looks like a swirling purple flame in the shape of a skull. According to Duo, this alien energy absorbs evil within a person's mind and then multiplies to infect others—mainly robots, in the case of the game. Due to this method of replication, the original source can only be harnessed by beings of pure evil. Duo hunts down this Evil Energy to stop it from infecting the whole universe and possesses the ability to heal its victims if their minds are not completely consumed by evil.

In the opening of Mega Man 8, Duo is seen in space, battling an evil-looking robot utterly consumed by the Evil Energy (it is unknown if this is a victim of the Evil Energy or an actual manifestation of the energy itself). He manages to defeat the robot, but both combatants fall to Earth, impacting a remote island. Unfortunately, the island happens to be Dr. Wily's secret base, allowing the mad scientist to discover the remaining Evil Energy. He escapes with his prize as Mega Man shows up, and eventually learns how to harness its special powers and its properties.

Using the Evil Energy apparently allowed Wily to power up his robots and construct a massive new fortress in the heart of a volcano. His first four Robot Masters carried capsules of Evil Energy in their bodies, although it isn't known if it had either augmented their powers, manifest a bad personality, or was simply a power source.

When the capsules of Evil Energy were collected, Mega Man brought them back to Dr. Light in hopes that his creator could analyze the energy resources. However, Duo, having been brought to Dr. Light's Laboratory for repairs, sensed the Evil Energy and destroyed it before breaking out and heading for the source of the power, which was located in Wily's tower fortress. Pursuing the mysterious robot, Mega Man also arrived at the tower, only to be attacked by a massive robot powered by Evil Energy. Duo arrived and destroyed the robot with a single blow, before explaining the nature of Evil Energy and his mission to Mega Man. Since Duo had to leave and destroy the Evil Energy spreading around the world, he left Mega Man in charge of taking down the barrier protecting Wily's fortress. After defeating the second four Robot Masters, Mega Man infiltrates the base. Along the way, he was forced to defeat Bass, who had used the energy to power himself up and fuse with Treble.

Dr. Wily used the Evil Energy to power his newest Wily Machine, and boasts that he can't be defeated with it. When Mega Man destroyed Wily's machine, the Evil Energy within it suddenly entered his body in an attempt to corrupt him. Duo managed to purge Mega Man of the energy through a combination of his own abilities and Mega Man's noble mind. With the last of the Evil Energy destroyed on Earth, Duo left to find other worlds where the evil power had manifested.

A similar "Alien Energy" (「あの時」のエネルギー, "Anotoki" no Enerugī, roughly "the energy 'from that time'") stronger than any energy on Earth makes an appearance in Mega Man 2: The Power Fighters. This mysterious energy can become imprinted by the heart of whoever uses it, for good or for evil. Because of it, it is possible that this energy is actually a neutral form of the black Evil Energy and, similarly, an opposite white "good/justice energy".[1]

After the events from Mega Man 8, a rare energy was discovered on a small island, and Dr. Light began analyzing it, but found performing a full analysis impossible. It was soon recognized that despite its infinitesimal size, this energy was incredibly powerful and dangerous. Great precautions had to be undertaken in handling it. Dr. Light was able to create experimental energy parts based on what he discovered. However, these new parts and the mysterious energy were stolen by Dr. Wily's robots in a surprise attack.[2]

Duo took notice of the events and went to Earth to stop Dr. Wily and his robots. After defeating Dr. Wily, Duo collects the stolen energy. Duo and Dr. Light remark that the energy is a lot like Duo's energy, and Dr. Light deduced that it is of alien origin. Deeming it too dangerous to remain on Earth, Duo leaves with the "Alien Energy", but promises to the others to return once more. In his endings with Mega Man and Bass, Duo mentions that he can sense justice energy (せいぎのエネルギー, seigi no enerugī) within them.[3]

Dr. Wily found a mysterious energy when two alien robots crashed on the island. He studies the energy and tries to harness its power, first using it to make a facility fly in the sky. Wily reveals the energy to Dr. Cossack, who becomes surprised and scared as the energy's output kept increasing. The recently awakened Duo uses his power to reduce the Evil Energy to a small size, but without it, the facility starts to collapse and Wily escapes with the energy.

Later, Wily uses the Evil Energy to power his Wily Machine. During the battle, the machine is completely consumed by the energy and it catches Mega Man, draining his energy. Wily is amazed by the energy, and is happy that he will finally defeat Mega Man. As Mega Man is about to lose consciousness, Duo appears and takes the Evil Energy off from the Wily Machine, crushing it with his giant fist.

The Evil Energy has yet to make a formal debut, although it was indirectly referenced, where the Evil Robot (named Trio in the comics) betrays the Star Marshals due to the power promised by Ra Moon.

In the Rockman.EXE Stream anime, Asteroid Navis possess the ability to heighten a person’s malicious intent and turn it into energy to power themselves up. At the end of the series, an army of Asteroids were distributed among humanity who begin to bring chaos and destruction, and Slur begins to harvest this “evil energy” to activate Duo’s comet and annihilate the planet. 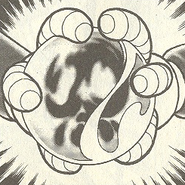 Evil Energy in the Rockman 8 manga.

Evil Energy in the Rockman 8 manga.

Wily Machine consumed by the Evil Energy in the Rockman 8 manga.