Mega Man (Archie Comics)
The Evil Robot (悪のロボット, Aku no robotto) is an alien robot that was fighting Duo was in the beginning of Mega Man 8. He was destroyed by his opponent in a battle which resulted in the two robots crashing to Earth. Duo managed to damage him to the point where his body went completely inert, but he did enough damage to Duo where neither one could slow down to avoid burning up upon reaching Earth. Though the evil robot was destroyed, the Evil Energy it harnessed lived on, which is what Duo spent the remainder of the game trying to destroy.

His appearance is almost identical to Duo's original form, albeit mirrored (opposite giant hands to Duo) and with a more "evil" looking armor and color-scheme. His head is also different, with slots under his eyes rather than Duo's T-Visor.

The Evil Robot, named Trio in the comic, has a brief appearance in Issue 42, where Shadow Man, when reflecting on his past, remembers an encounter with a robot similar to Duo belonging to a group called the Star Marshals. Along with a robot named Quartet, this robot decimated Shadow Man's fellow Kuiper Droids as they were attempting to escape the battle between the Marshals and the Stardroids and escort their master, the Ra Moon, to safety. The evil robot ends up saving Shadow Man by stabbing Quartet in the back with his arm, to even Shadow Man's horror. Trio had defected from the Star Marshals after seeing the power promised by the Ra Moon. He allows Shadow Man to escape and take Ra Moon to Earth while he makes up an excuse to his superiors.

The Evil Robot has a short appearance in Mega Man Gigamix and the Rockman 8 manga. 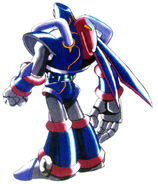 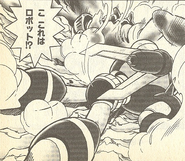 Duo and the evil robot in the Rockman 8 manga.

Evil robot and the white robot in Mega Man Gigamix.
Add a photo to this gallery

Retrieved from "https://megaman.fandom.com/wiki/Evil_Robot?oldid=355898"
Community content is available under CC-BY-SA unless otherwise noted.