"Playing 'hero' must be a fun way to pass the time..."
—Fairy Leviathan

Like her siblings, her armor is based on that of her biological-data origin, X, with thematic alterations. Her armor is colored blue, symbolizing her alignment with water and ice. Her name is derived from that of the biblical sea monster, Leviathan, and typically refers to any large sea creature. Her helmet frames her face in such a manner as to resemble hair, with the sides forming the 'fringe' and a seashell motif forming the 'bangs'. The back is mounted with a long dorsal fin-like jet, which she uses to propel herself through bodies of water. She wields a harpoon-like weapon, the size of which she can alter, and she uses it to create ice and launch torpedoes. To highlight her being female, her armor's design has the appearance of an outfit akin to that of female swimmers, plus her boots appear to be heels.

In her Armed Phenomenon form, Leviathan's armor expands to become a submarine in the shape of a gigantic manta ray, becoming much more fitting of the name 'Leviathan'.

Leviathan is not particularly fond of violence, but she seems to enjoy battling against Zero, being playful with him. The designers of the Zero series have expressly stated that they wish they could have worked on both Fefnir and Leviathan more to "flesh out" their personalities. This leads some to believe they may have much deeper personalities than the games alone display. As a result, Leviathan may act flirty at times, but rarely does so enough to fully "flesh out" her personality; unlike Fefnir's, which can be obviously seen immediately from his "violent tendencies". She prefers to stay underwater, as she says "land is too dusty" for her.

As a Reploid able to control the currents and water temperature, Leviathan has paired up with Harpuia before to execute large-scale projects aimed at helping humans re-populate habitable areas.

At some point, Leviathan, along with her three siblings, became military generals of Neo Arcadia, responsible for the overall safely of Neo Arcadian habitants, both humans and Reploids. Leviathan, given her unrivaled superiority in the water, was appointed to become the leader of the Meikai Army, Neo Arcadia's navy forces. She commanded various water-type forces and Mutos Reploids. The Mutos Reploids Blizzack Staggroff and Poler Kamrous belonged to her forces.

Leviathan first encounters Zero after he thwarts her attempts to hack into the Resistance Base (in the "Stop the Hacking" mission). Despite the fact that the battle with her (both in the mission and near the end in Neo Arcadia's Area X) is underwater, she is weak to Flame (because she is of the Ice Element). She later has a rematch against Zero, but after being defeated, fled the area. She does attempt, alongside Sage Harpuia and Fighting Fefnir, to prevent Zero's passage to Copy X, but were forced to stand down under Copy X's orders. Unlike her "brothers", she seemed to be compliant to Copy X's command of leaving him alone with Zero.

Zero encounters Leviathan in the same Computer Zone that he fought Poler Kamrous, albeit in a different part of it. As before, the battle is underwater (Leviathan floods the room upon the start of battle), although the spike pits are removed. When going after Elpizo in Yggdrasil, Zero fights against Leviathan in her Armed Phenomenon form within the Temple of Ice, having been given a power boost from the Baby Elves Elpizo had with him, which increased her urge to fight Zero and awakened this form. Zero still manages to defeat her, and she leaves reluctantly.

Leviathan took part in a mission to investigate the wreckage of a crashed spaceship that contained the exiled Reploid, Omega at the beginning of Mega Man Zero 3. She and Fefnir were heavily damaged in the battle with Omega. Because of Dr. Weil's return as well as his constant orders to both the maintenance and medical teams, only three people were available to treat her and Fefnir. However, shortly after the transfer, they lost consciousness and were in critical condition, as they later told Harpuia. Harpuia later remarked to Copy X that "Fefnir and Leviathan are still undergoing repairs", but neither he nor them were allowed a chance at trying to capture the Dark Elf, due to Copy X demoting them and giving full command of Neo Arcadia's military to Dr. Weil. In one of the drama tracks from Remastered Tracks Rockman Zero Telos, the original X and Phantom appear to Fefnir and Leviathan and say they must help Zero defeat Omega and Dr. Weil.

Leviathan made no appearance in Mega Man Zero 4 and wasn't mentioned either. However, prior to the Japanese release of the game, a web blog entry of the developers stated that X, along with the Four Guardians, assisted humans outside Neo Arcadia in escaping Dr. Weil. An artwork featured in Vile's Incident, an information booklet included in Remastered Tracks Rockman Zero Physis, a soundtrack CD of the game with rearranged music, showed Leviathan, along with her siblings and the original X, witnessing the fall of Ragnarok, all of them wearing ceremonial coats. However, with the release of Mega Man Zero Official Complete Works, Zero series artist Nakayama stated that the picture is just something he drew for fun and is non-canon. The picture was thus retconned and the remaining three of the Four Guardians were stated to have died in the explosion of Omega at the end of Mega Man Zero 3, deeming the artwork fan art and not actually canon. On the other hand, Q & A corner in R20+5 Rockman & Rockman X Official Complete Works, it is suggested that they are living from Omega's explosion and fighting for humans outside of Neo Arcadia’s surveillance.

In Mega Man ZX, Leviathan makes a cameo appearance as a doll pulled by the giant crane in Area H-3.

Leviathan also makes an appearance in the Mega Man ZX series as Biometal Model L. Vent/Aile combines it with Model X so they can use it against Serpent. Model L further gives evidence that it is Leviathan as it holds respect for Model X and likes to exchange banter with Model Z, Zero reborn as a Biometal (once again indicating Leviathan's flirtyness).

In Mega Man ZX Advent, Model L is stolen and used by Thetis. It is suggested that Model L is working with him against its will, as Model L was made to stop Model W, and Thetis wanted to awaken it.

As a Reploid clone of the original X, Leviathan is an extremely powerful warrior in her own right. Leviathan is a powerful Reploid who manipulates the ice element and excels in underwater combat. While underwater, she's capable of swimming and maneuvering at high speeds, giving her an edge in battle; and, as an aquatic Reploid, she is capable of sustaining herself underwater for long periods of time (perhaps indefinitely). Being a skilled user of the ice element, she is capable of manipulating ice greatly to her advantage, particularly while underwater: she can produce a variety of attacks from her halberd/lance, such as raining down sharp icicles or creating ice dragons that lock on and follow targets; and she is capable of using the ice to give her strategic advantages, such creating blocks of ice or using her icicles to limit the movement of her enemies. Given this, it could be said that her fighting style is more indirect than the other three Guardians, as she tends to prefer attacking from a distance with her element than engaging in close range attacks with her weapon. Her EX Skill is to summon an ice dragon.

All the Four Guardians possess a powerful alternate form called "Armed Phenomenon" which can be activated when facing more difficult enemies. When activating her Armed Phenomenon, Leviathan's body transforms into a giant blue submarine modeled after a manta ray with wide wings and a long tail. In this form, she attacks with powerful dash attacks, razor-sharp ice crystals shot from her head gem and torpedoes fired from her body. She is also able to materialize ice dragons which attack imminent targets or form a prison made of their bodies to entrap her enemies.

Leviathan appears as a S Rank character in the July 9th update for Mega Man X DiVE. Her attacks involve summoning the ice dragon she used to attack Zero with in the first Mega Man Zero game, as well as slashing her halberd at enemies.

Leviathan appears in the Rockman Zero manga. She fights against Zero after the death of Blizzack Staggroff, because she wants to avenge him, but Zero defeats her with the Flame Chip. Later, she combines with Harpuia, Fefnir, and Phantom to become "the perfect Reploid".

Some of Leviathan's early concept art.

Leviathan in the the manga. 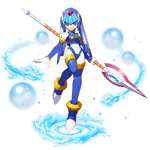