Fake Man (フェイクマン, Feikuman) is one of a series of reprogrammed or counterfeit police robots that appears as the boss of the Special Stage from Mega Man 9 that became available on October 20, 2008. In the game's main content, two Fake Men appear inside the Wily Castle. Dr. Wily claims that he was the police robot that arrested Dr. Light, but Proto Man proves correct in assuming that the "Dr. Light" Wily has captive is the robot copy Wily used to make the fake video released to the press. Thus, Fake Man did not arrest Light, and, in fact, Light was arrested by the real police, who released him once Mega Man delivered the Memory Circuit Board to them.

In the Special Stage, Mega Man must traverse a city landscape and face difficult enemies, one boss, and all of the mini-bosses found in the main content of Mega Man 9 as he makes his way to the lair of Dr. Light's "arresting officer."

Fake Man is very agile and uses his Revolver Buster[1] to rapidly fire projectiles at Mega Man. This weapon has the advantage of firing in multiple directions, but is offset by the need to manually reload every six shots, leaving Fake Man defenseless for a short period. Fake Man won't fire his weapon unless Mega Man provokes him, though he will attempt to run into Mega Man regardless of his intent. His pattern of shooting is: he jumps backwards and shoots an energy shot in the air and then another on ground, then jumps to the other side and fire two energy shots at the player's current location: one when he just jumped and another when he is about to land, and he will shoot the last two by jumping in place. If Mega Man uses the Jewel Satellite weapon, he can reflect Fake Man's shots back at him for small damage, or deliver a heavy amount of damage to him with the Jewel Satellite itself. However, the Jewel Satellite doesn't have enough weapon energy to defeat him, so it is recommended to reflect the most energy shot at him when he is shooting, then fire the shield at him while he reloads, then jump over him to avoid being rammed by him, and activate the shield again to trigger his pattern again.

Displays the amount of damage in units that Fake Man will receive from each Special Weapon in Mega Man 9.

When Sonic Man attacks Mega City in Worlds Unite, two real police robots that Fake Man is based on appear alongside two police officers attempting to stop him, but they are no match for the Roboticized Master.

In the Short Circuits from Mega Man #20, Dr. Wily creates Police Man, a Robot Master almost identical to Fake Man except for the lack of a weapon replacing his forearm and his usage of a baton. Police Man was intended to infiltrate the local law enforcement and bend them to Wily's will, but instead he goes after Wily because of his large repertoire of crimes, including theft, disturbing the peace, assault, forgetting to call his mother on her birthday and reckless driving.

The police robots Fake Man is based on appear in the short Mega Man Megamix manga story "For Whose Sake?" included in the booklet of Rockman 9 Arrange Soundtrack to arrest Dr. Light. 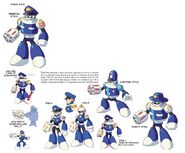 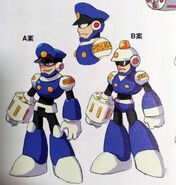 8-bit police robot from Mega Man 9.
Add a photo to this gallery

Retrieved from "https://megaman.fandom.com/wiki/Fake_Man?oldid=351819"
Community content is available under CC-BY-SA unless otherwise noted.