Falzer (ファルザー, Faruzā) is a large Cyber Beast hailing from Beyondard, appearing in Rockman.EXE Beast. He is at war with Glaga over the rights to rule Beyondard with an army of Zoanoroids that have been abandoned by their operators. He and Glaga are also searching for Trill, whom they refer to as the "Synchronizer".

He appears in episode 1, where he collides with a Sharo fighter jet while invisible to the naked eye, destroying it. He then jets through the air, collapsing buildings and a mineshaft. At the SciLab, Dr. Hikari notes that there are two beasts causing destruction, and they are heading towards one another.

He appears again in Densan City, blasting through a bridge while speeding to Glaga. The two collide causing mass destruction and making them to materialize, and the two begin to brawl in the city, ending up in a nearby stadium. Raika, Enzan Ijuin, and Netto Hikari cross fuse to stop them, but they don't cause any damage despite their best efforts, the the two Cyber Beasts simply ignore them. The two disappear due to a lack of electrical energy and end up in the Cyber World where they continue their fight. As SearchMan and Blues attempt to hold off the Cyber Beasts, Trill causes Rockman to Beast Out, and he combats the two easily. Though the two prepare to fight more, they vanish.

Through the series, Falzer communicates to his minions through a mural of him.

He reappears in full in episode 14 pursuing Zoano DarkMan of Glaga's army, who was in possession of Iris and Trill, and attempts to attack him with a shockwave, but Glaga appears and counters him, sending Zoano DarkMan and Iris hurtling to the ground below. 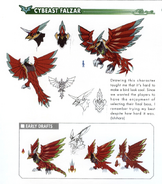