Fire is a hazard in the Mega Man franchise, and also a recurring method of attack from enemies and playable characters, common examples being fireballs (e.g. Atomic Fire), a stream of flames (e.g. Wave Burner), and flaming pillars (e.g. Flame Blast).

Fire Block (炎放射ブロック, Fire Block "Flame Emitting Block" in Japan),[1] also known as Burner Block (バーナーブロック, Burner Block)[2] is a block that appears in the first Mega Man game, its remake Mega Man Powered Up, in Mega Man: The Wily Wars, and Mega Man: Dr. Wily's Revenge. The block periodically unleashes flames that cause damage. The flames can be frozen with Ice Slasher, creating a temporarity platform. It is more common in Fire Man's stage, but also appears in other stages. In Mega Man Powered Up, Fire Man is immune to them and can use these blocks to recover his abilities if his fire was extinguished.

Mega Man 7 has fire blocks similar to the ones from the first Mega Man game, with a timer showing when they will release the flames. The flames cause 4 points of damage and can be frozen with Freeze Cracker, enabling Mega Man to be use them as temporary platforms. They appear in Turbo Man's stage and in the Wily Castle.

In Mega Man & Bass, the Opening Stage had fire structures that acted like the ones in Mega Man, but could not be frozen. The Ice Wall broke when entering in contact with the flames. The Big Tellies in Mega Man & Bass drop a large bomb that created a large fire. This enemy could be found in Burner Man's stage.

Mega Man IV has lethal flames in Napalm Man's stage that can be temporarily extinguished with Rain Flush.

In Mega Man Zero 4, the Caravan settlement in Area Zero is set on fire by Neo Arcadia and Zero must extinguish the flames.

In Mega Man Battle Network, FireMan sets fire on the oven from Lan's house and MegaMan must extinguish virtual flames to reach him. 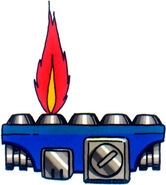 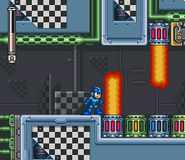 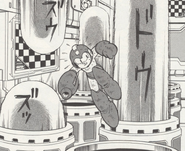