"They think we're tools! And one mistake, suddenly, your work is shoddy! And Rudy in HR says you should be a fry cook! I ain't no fry cook! I'm Fire Man!"
—Fire Man, Throwing Shade Part I

Fire Man is an antagonist from Mega Man: Fully Charged. He worked as a welding robot until he lost his temper and was fired, subsequently being recruited by Sgt. Night to help him start a war between humans and robots. Under Sgt. Night's orders, Fire Man went to Silicon City's school to cause chaos, but Mega Man interfered with his actions and Fire Man retreated when the humans and robots banded together instead of fighting.

Fire Man resembles his original counterpart, but is larger, bulkier, and has a fire tank on his back, with wires connecting to his arm cannons.

Fire Man has a short temper that drives him to destructive acts. He especially has a strong dislike for humans, who he blames for his seething rage. Any attempt to calm him or reach out to him either falls on deaf ears or makes him even angrier. Despite his hotheadedness, Fire Man is capable of following through with or creating more elaborate plans, as indicated by his interactions with Breaker Night and his short partnership with Wave Man. In Enemy of my Enemy, Fire Man developed a rivalry against Namagem and tried to fight him.

Fire Man can release powerful flames from his arms, and he is strong enough to push or knock enemies a long distance. These flames can be release as either a continuous blast or individual fireballs. He can also use his blasters to thrust himself into the air, allowing him to make big jumps or even fly briefly. In Fire Man in the Hole, his blasters were upgraded to be able to shoot blue fire, which is hotter and more destructive than the normal red fire he typically shoots from his blasters.

Being a fire-themed robot, Fire Man is designed to be able to withstand very high temperatures, although extremely hot substances such as lava can still damage him. 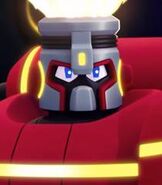 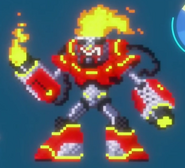 Fire Man with Namagem and Mega Man in 8-bits

"Mega Man Jumper" print by Jose Emroca Flores that features Fire Man in the background.
Add a photo to this gallery

Retrieved from "https://megaman.fandom.com/wiki/Fire_Man_(Mega_Man:_Fully_Charged)?oldid=304633"
Community content is available under CC-BY-SA unless otherwise noted.