Fire Saurian, known as Fire Dinosaur (ファイアダイナソー, Faia Dainasō) in Japan, is the Tribe On form of Mega Man after he obtains the power of the ancient Rock of Saurian OOPArt.

Fire Saurian's buster head is now merged with the Rock of Saurian, covered with burning flames, allows it to fire deathly genocide flames. The whole body is colored red, designed after a dinosaur with round, large armor parts with claws emerged.

Fire Saurian is a ferocious dinosaur-like fighter, unleashing deathly blazes with his cannon to incinernate everything on the battlefield.

Fire Saurian is a survivor from the Shooting Star Rockman Tribe. 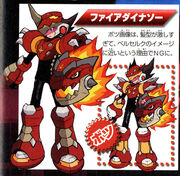 Concept art of Fire Saurian.
Add a photo to this gallery

Retrieved from "https://megaman.fandom.com/wiki/Fire_Saurian?oldid=287033"
Community content is available under CC-BY-SA unless otherwise noted.