Mega Man 11
Fire Server (ファイアーサーバー, Fire Server) is an enemy from Mega Man 11 who appears in Blast Man's stage and Gear Fortress stage 3. It releases fireballs from its arm, which can detonate explosive blocks. When defeated by any attack other than Blazing Torch, Chain Blast or Tundra Storm, the tank will stay behind, then burst shortly afterwards, spinning in an arc pattern and exploding on impact.

According to their bio, Fire Servers were meant to serve soda to the customers at Flower Land.

This drink vendor robot has had its soda replaced with flammable oil. The tank on its back could go up at any moment. 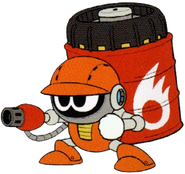 Concept art
Add a photo to this gallery
Retrieved from "https://megaman.fandom.com/wiki/Fire_Server?oldid=351931"
Community content is available under CC-BY-SA unless otherwise noted.