MMKB
Register
Don't have an account?
Sign In
Advertisement
in: Shield weapons, Special Weapons in the classic series, Mega Man items,
and 3 more

Fire Storm (ファイヤーストーム, Faiyā Sutōmu) is Fire Man's Special Weapon. It shoots a fireball forward and causes a small flaming orb to circle the user, providing a brief shield effect. Both the fireball and orb can cause damage.

In the Mega Man Archie Comics serial, Fire Storm was used by Fire Man and copied by Mega Man. In one of the Short Circuits, Mega Man briefly imagined Roll using Fire Storm to clean up a basement when she was forgiving Mega Man for his earlier actions (when he lost control) in Issue #3. 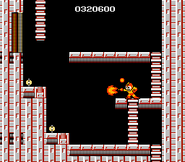 Mega Man getting Fire Storm in the cartoon's opening. 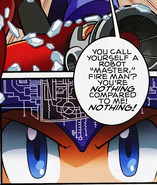 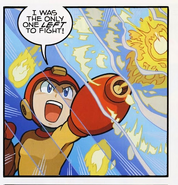