"Oh, it's YOU that's causing my suffering! Then if I tear you to pieces, the pain will stop!"
―Flame Hyenard, Mega Man X7

Flame Hyenard was a bounty hunter who was one of the main fighters in the vigilante group Red Alert.

Eventually, the Professor came into contact with Red Alert and used DNA data to greatly enhance the strength of its members, Hyenard included. However, this also made him subservient to the will of the Professor. For some reason, unlike the other members, the Professor's mind control also caused Hyenard to undergo severe physical pain.

After Red Alert and the Maverick Hunters went to war against each other, Hyenard took over an industrial complex as well as an huge gazelle-shaped Mechaniloid and lied in wait for the Hunters.[1] When they arrived, Hyenard decided to kill them, believing them to be the ones responsible for his suffering. However, the Hunters proved stronger and defeated him in a fierce battle, putting the crazed Reploid out of his misery.

Flame Hyenard is an average-sized Reploid with the design of a hyena. His armor is mostly sandy brown and black, with various vents and exhaust holes located around his body. One of his shoulders was normally open, constantly emitting a small stream of fire.

When X, Zero and Axl encountered Flame Hyenard, he was in a crazed and delusional state. He initially disregarded their invasion of his lair, walking right by them with little thought, but upon noticing them decided that they were the cause of his suffering. He then became aggressive and attacked, giving the Maverick Hunters little choice but to put him down. It's implied that his affliction was caused from being infected with the Sigma Virus. It is unknown what Hyenard's personality was like before the infection.

Hyenard creates two copies of himself that will pursue and attack the player while he stands on the head of a giant gazelle-type Mechaniloid that is walking through the lava surrounding the starting platform, launching guided missiles.

An alternate strategy is, once on the Mechaniloid, run straight for its shoulders and position the character there.

Flame Hyenard: Hrk...Agh...It...It hurts...
Zero: So you're that Hyenard. You've been diagnosed with a malfunction. You must come with me.
Flame Hyenard: Oh, it's YOU that's causing my suffering! Then if I tear you to pieces, the pain will stop!


Zero: Ah! The sickness is already in its late stages. I don't think he'll come quietly.

Flame Hyenard: Hrk...Agh...It...It hurts...
Axl: Hyenard?
Flame Hyenard: Oh, it's YOU that's causing my suffering! Then if I tear you to pieces, the pain will stop!

Flame Hyenard has a brief appearance in the last issue from Dreamwave Productions' Mega Man comic.

Flame Hyenard was one of the many Mavericks featured in Worlds Unite, and his presence was noted as Axl recognized several of his "old friends from Red Alert" amongst the Maverick army led by Sigma-2. 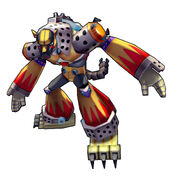 Concept art of the gazelle Mechaniloid. 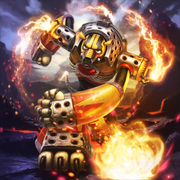 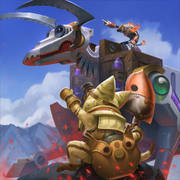