Flame Mammoth, known as Burnin' Noumander (バーニン・ナウマンダー, Bānin Naumandā) in Japan, is one of the eight Mavericks in Mega Man Maverick Hunter X. Originally a Maverick Hunter stationed in the Middle East and leader of the 4th Land Battalion, Flame Mammoth joined Sigma's rebellion out of a thirst for more power.

Leader of the 4th Land Battalion, Flame Mammoth used to be stationed in the Middle East. Hearing of Sigma's rebellion, he dreamt of getting an even tighter grasp on his own potential power and of going on violent rampages, and decided to join the rebellion. He enjoys crushing and humiliating anyone weaker than himself and was hated by the Reploids who served under him. This is why none of his battalion followed him to join in the rebellion. He plans on letting his firepower do the talking, taking over an industrial area, and turning it all into weapons manufacturing.

With an arm converted into a powerful flamethrower, it deals continuous damage to enemies. The only thing is, it can't be used underwater.

Though he was a leader in the Maverick Hunters, Flame Mammoth is sadistic and cruel and loves violence and bullying those smaller than him rather than fighting for justice, and has caught the ire of his subordinates and comrades, who refused to follow him into Sigma's rebellion. He talks in a dull witted tone, but seems to be smarter than he gives off, as when taking to Vile he states he is aware that he is not on the side of justice before they fight.

Despite joining Sigma's rebellion, none of his comrades joined him out of dislike for him. He takes over a prototype weapons plant, where X confronts him. X tells him not to follow through on his actions, but Flame Mammoth merely looks forward to destroying X and the two fight. In Free Play and Hard Mode, Flame Mammoth asks why Sigma would see X as the future if Reploids, to which X does not answer. He is revived as a mindless shell of himself alongside his fellow Mavericks at Sigma's fortress, where he is destroyed for good.

In Vile's story, Flame Mammoth asks Vile if he has joined the side of justice, which he denies. He challenges Flame Mammoth to a fight, and destroys the giant Maverick.

Flame Mammoth can spit oil as well as red flames directly at the player. If a flame shot lands on the oil, it will engulf into a larger flame that ignites on the ground for a couple of seconds. In Hard mode, he will also shoot blue flames in random areas in front of him which erupt into a pillar when they hit the floor. He will attempt to jump on the player. If he lands on the ground after his jump while the player is still on the ground they will fall to the ground, temporarily stunning him, so the player should jump when Flame Mammoth is about to land. His room is quite large, resulting in his ability to go off screen, where the player's attacks cannot affect him, but his can still affect the player. He can also change the direction of the conveyor belt, on which the fight takes place. If X's Boomerang Cutter or any of Vile's Cutter weapons is used on Flame Mammoth, his trunk will be cut off, preventing him from spitting oil. The Storm Tornado is Flame Mammoth's weakness, though it cannot make him flinch in both games. An uncharged Storm Tornado is the only weapon that can douse his flames.

Flame Mammoth: Ha ha ha! I was wondering who would show up... I didn't expect a B-Class Hunter like you! X: What are you doing, Flame Mammoth? Don't be stupid! Flame Mammoth: Bwah ha ha! There's nothing I like more than stomping weak little blabbermouths like you into dust! X: That settles it... You're definitely a Maverick!

Flame Mammoth: Hmpf! Why does Sigma think that a weak little B-Class Hunter like you is even worth my time? X: Sigma's a Maverick, just like you! Flame Mammoth: Sigma must be as crazy as you say. He keeps talking about how you are the future of Reploids. Can you believe that, X? X: ... Flame Mammoth: Ha ha ha! Now it's time for me to stomp the future into dust!

Flame Mammoth: Vile? What are you doing? If you've joined the side of justice, you can leave now! Vile: Justice? Gimme a break, Flame Mammoth. I'll fight you if that's what you want. Bring it on... Flame Mammoth: Wah ha ha! You just bit off more than you can chew, Vile! I'll make sure you regret it! 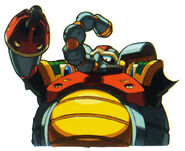 Concept art.
Add a photo to this gallery
Retrieved from "https://megaman.fandom.com/wiki/Flame_Mammoth/Maverick_Hunter_X?oldid=355261"
Community content is available under CC-BY-SA unless otherwise noted.