Flame Man (フレイムマン, Fureimuman) is a fire themed Robot Master from Mega Man 6 originally created to generate a large amount of thermal power, which is also his energy source. Although this is a somewhat outdated power source, it gives him more stability than robots with solar energy. Flame Man was later modified for the First Annual Robot Tournament, his thermal power circuits being turned outward so he can use his immense thermal energy for fire attacks, released in the form of a flamethrower on his arm. With it, not only can he can attack from a distance with searing balls of fire, but he can utilize his Special Weapon, the Flame Blast, to scorch opponents with flames that erupt from the ground.

Flame Man is very punctual, changing his oil three times a day due to his energy source. However, living such a strict routine has made him demanding. He sports a turban and enjoys taking care of his mustache, but is somewhat fussy and dislikes using cheap oil to power himself.

In the First Annual Robot Competition, he was reprogrammed by Mr. X to help him conquer the world, but was defeated by Mega Man. His weakness is the Wind Storm, due to its ability to weaken him by cooling him down and blowing out the flames he produces.

Flame Man attacks by shooting three slow fireballs. They can be avoided by jumping over them one by one. He also jumps high, and can land over Mega Man if he is not careful enough. The player can avoid it by moving to the side Mega Man has more room when Flame Man lands. He also attacks by putting his flamethrower on the floor and sending Flame Blasts, consisting of several pillars of fire rising from the floor that block any attack. It is avoided by jumping over them when they are about to rise and towards Flame Man so Mega Man lands on a safe spot where the rest of the fire doesn't reaches him - however the location of the Flame Blast pillars can be a bit unpredictable and sometimes jumping will result in getting hit. His weakness is Wind Storm, which not only greatly damages Flame Man, but also ignores the Flame Blast and still makes it to hit Flame Man. It defeats him in seven hits.

Flame Man is a recurring enemy and optional teammate in the game Rockman Strategy. He joins Bomb Man and Aries at the Steelmaking Factory in Northern Asia, before appearing in Dr. Wily's laboratory in Saudi Arabia to aid the Wily Machine. In this second battle, he fights alongside Frost Man, Spark Man, and Metal Man. 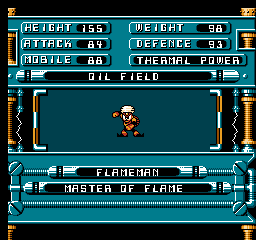 Mega Man Legacy Collection text: An old-fashioned robot that generates heat energy. If you try to dodge the flame pillars by watching for them, it will already be too late. Try to memorize the timing.

Enemies that appears in Flame Man's stage, an Arabian temple with many oil pools.

Displays the amount of damage in units that Flame Man will receive from each Special Weapon in Mega Man 6.

Flame Man's power source is a built-in generator that burns liquid fuel, though it also carries solid fuel as a back-up. Flame Man's buster is connected directly to the furnace of his power generator, granting him the use of fire projectiles. His Flame Blast attack involves compressing his solid fuel source in an oxygen-free, 4000 degree Celsius environment before firing the resulting mass, which then reacts with the surrounding oxygen and ends up bursting into a pillar of fire. Flame Man was modified for combat to enter in the Ultimate Robot Championship in the story "The Strongest Enemy to Date", but was controlled by Mr. X to help him conquer the world. After Mr. X's defeat, he returns to normal and is repaired by Dr. Cossack, later seeing the battle between Mega Man and the Copy Mega Man.

He also appears in the Mega Man Gigamix story "Moon of Darkness", where he is defeated by Uranus during the Stardroids attack around the world, but is repaired after their defeat.

Flame Man is featured in the Archie Comics Mega Man line, making his debut during the Worlds Collide crossover event. Together with many of the Robot Masters, he takes part in a battle against Sonic the Hedgehog and Mega Man's allies. He joins up with Pharaoh Man, Heat Man, Magma Man, and Burner Man to attack Blaze the Cat, but ends up having his firepower—and that of his accomplices—turned against him by the pyrokinetic Cat. This was an early appearance for Flame Man, as prior to the crossover the Mega Man comic hadn't yet completed its Super Adventure Rockman adaptation, which in the comics is set between Mega Man 2 and Mega Man 3.

Front, side, and back view of Flame Man.

Flame Man in the manga Rockman 6. 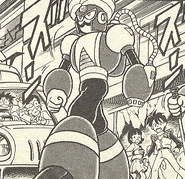 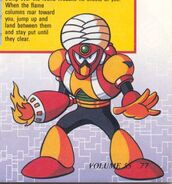