In combat, Flash Man can stop time to immobilise his opponents, before attacking them mercilessly with rapid barrages of shots from his buster while they cannot move. To his enemies, Flash Man appears to be moving at light speed or teleporting. It is believed that this ability is a perfected form of what the later-introduced Time Man was capable of- because unlike Time Man, who could only slow down time with Time Slow, Flash Man can stop it completely.

In Archie Comics's Mega Man comic book series, Flash Man first appears in the end of issue 8, where he is built by Dr. Wily. In issue 11, Flash Man is surprised and offended to see an exhausted Mega Man confronting him after evading all of his troops. He uses his Time Stopper to freeze time and knock Mega Man's helmet off, and for a moment, gazes at Mega Man's hair in envy. While questioning why Dr. Wily did not build him with any hair, he gets hit from behind with a Quick Boomerang and is immediately disabled. Quick Man appears saying he wants a duel, and without him noticing, Mega Man copies Flash Man's Time Stopper.

Flash Man is later revived by Ra Moon in Spiritus Ex Machina, along with the rest of the Mega Man 2 Robot Masters, and resents Quick Man for destroying him in the first place. While patrolling in the jungle, he found a large gem and gave it to Dr. Wily, starting the events from the crossover Worlds Collide. He and the other robots help Wily and Eggman create the Wily Egg. Later in Worlds Collide, he is one of the many Robot Masters that fighting against Sonic the Hedgehog and his friends. He uses Time Stopper to on Silver the Hedgehog and shows his obsession to hair by looking Silver's hair with great envy.

After the Super Genesis Wave was undone and Mega Man's realm was restored to order, Ra Moon took control of Flash Man alongside the rest of Dr. Wily's robots due to reconstructing them. Flash Man, alongside Heat Man, Bubble Man, and Metal Man, proceeded to attack Mega Man alongside Cut Man, Guts Man, Bomb Man, and Rush when the latter group arrived at the Amazon. Flash Man utilized his Time Stopper ability to evade attacks from Guts Man and Rush, although the former eventually managed to land a hit on Flash Man while the latter was distracted with pinning the Blue Bomber with Time Stopper in response to Mega Man's request for answers, while also refusing to supply them. He later got caught in a bear hug by Bomb Man, the latter intending to pin him in place while Cut Man finished him off with Rolling Cutter, although he used his Time Stopper to escape from Bomb Man, resulting in the latter getting hit with the attack instead. His escape was short-lived when Rush bit his arm cannon, distracting Flash Man long enough for the Blue Bomber and Cut Man to disable his Time Stopper by shearing off his arm cannon with Metal Blade and Rolling Cutter, respectively. However, unlike the last time where he was destroyed, Mega Man and co. decided to let them live and to tell them information. They refuse thus forcing Mega Man and co. to continue onwards.

Later, after being repaired, Flash Man and the others came around and decided to ally with Dr. Light's robots in stopping Ra Moon, after learning that what Ra Moon was planning was not what Dr. Wily would have supported. During the battle, Flash Man used his Time Stopper to halt Shadow Man in his tracks, also ordering for any Robot Masters to attack Shadow Man while he's still pinned down. Shortly after, Ra Moon removes the electromagnetic protection of the Mega Man 2 Robot Masters, disabling Flash Man and the others. Once Ra Moon is destroyed, Flash Man and the others are revived, and join the now loyal Mega Man 3 Robot Masters in setting up the next phase of Dr. Wily's plans by building a new fortress. He later appears to Wily at Light Labs, using his Time Stopper to appear unnoticed, and informs Dr. Wily of their progress. 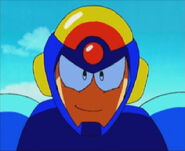 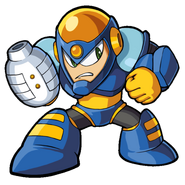 Retrieved from "https://megaman.fandom.com/wiki/Flash_Man?oldid=218255"
Community content is available under CC-BY-SA unless otherwise noted.