Flash Stopper (フラッシュストッパー, Furasshu Sutoppā) is Bright Man's Special Weapon. This is not to be mistaken as Flash Man's power, Time Stopper. Unlike Time Stopper, the Flash Stopper emits an intense light that activates a safety device in the camera eyes of robots, blinding them for a short period, which makes them unable to move and open for attacks.[1] However, when used in the games it appears to freeze time, being able to stop projectiles and enemies without eyes such as Super Ball Machine Jr. and Pakatto 24. Flash Stopper does no damage to enemies directly, but it has a bonus effect: It can allow Mega Man to attack shielded enemies, like Shield Attacker and Skeleton Joe, without the Mega Buster shots being deflected or doing no harm.

This weapon is Pharaoh Man's weakness, as when it is activated, he cannot move. Pharaoh Man will also take damage faster when Flash Stopper is activated, as he does not flash while it is active and consequently does not have the brief invincibility period. Although the stopping effect itself does not damage him, he can be held in place with it, before firing away at him. No Robot Master besides Pharaoh Man are frozen by this weapon if it is used against them.

In Mega Man (Game Gear), it is called Bright Weapon, and the weapon now damages all enemies on the screen.

*For Flash Stopper, Pharaoh Man is the only boss that is vulnerable to it, thus more damage can be inflicted on him with this weapon than on other bosses.

Flash Stopper is used by Mega Man in the Mega Man animated series and in the Rockman 4 manga. In the cartoon, Mega Man uses it like Bright Man does by protruding a light bulb from his buster and shining a continual bright light, unlike the brief flash used in the games. Humorously, Mega Man also manages to use sunglasses to block the Flash Stopper's optic disabling effect.

The Flash Stopper made its debut in Issue 40 of the Mega Man Archie Comics serial, where Bright Man was modified by Mega Man on Dr. Wily and Dr. Cossack's orders (the latter being extremely reluctant to have him undergo the modifications). Upon the modification's completion, he used its full power to halt the Wily Walker in its tracks. The ability, however, caused some damage to Pharaoh Man, requiring that his creator inspect him. 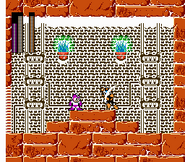 Flash Stopper in the Rockman 4 manga.