Mega Man Legends
Mega Man Legends 2
Rockman DASH: 5tsu no Shima no Daibouken!
Namco × Capcom
The Flutter (フラッター号, Furattā Gou) is a small airship from the Mega Man Legends series shaped like a sunfish that belongs to Barrell Caskett. His granddaughter, Roll Caskett, usually pilots the Flutter and takes care of it. This ship is the home for the Caskett family.

Bad things have a habit of happening to the Flutter, including its crash landing in Mega Man Legends, being set on fire by a clumsy Data in Mega Man Legends 2, crashing twice in Rockman DASH: 5tsu no Shima no Daibouken!, and getting stuck in Namco × Capcom. The interior is actually much larger than it appears from outside, allowing the crew to live comfortably, as evidenced by the many luxuries one may purchase for it in Mega Man Legends 2.

After leaving an ancient tower, the Flutter's engine began overheating. Needing to land as fast as possible, Roll pilots the Flutter to the closest area, Kattelox Island, where it crash landed and got severely damaged. Roll starts repairing the airship while MegaMan Volnutt goes on a dig to find parts to repair it. After finding a Refractor in Lake Jyun, the repairs are complete and the Flutter can be used to access the Clozer Woods Sub-Gate. After leaving the Sub-Gate, the Bonne family engages the Flutter in an aerial battle with five Draches, the Gesellschaft, and Focke-Wulf. Despite the odds, MegaMan manages to protect the Flutter and takes down the air pirates, also lamenting their fate as it didn't appear they would survive the fall. After MegaMan Juno's defeat, the Caskett family uses the Flutter to leave Kattelox Island.

While watching TV inside the Flutter, MegaMan and Roll see Matilda Caskett in the Sulphur-Bottom, and they use the Flutter to check if that's really Roll's disappeared mother. On the way, Data accidentally sets the Flutter on fire while cooking, and MegaMan extinguishes the fire with the Aqua Blaster. Afterwards the Flutter is used as the main way of transport to obtain the keys to the Mother Island hidden on different islands, and MegaMan can use Zenny to repair the damage caused by the fire and buy decorations to the airship.

MegaMan, Roll and Barrell's rooms are on the same floor on Mega Man Legends along with the living room, however on Mega Man Legends 2 the Flutter had undergone major changes. The bathroom and kitchen became available and the living room moved to the lower deck while Barrell, Roll and MegaMan's room are on the upper deck, the same deck that will lead to the Flutter's bridge. Their personal rooms became smaller than its predecessor.

Flutter's specifications in the first game.[1]

The Flutter appeared in Namco × Capcom, where it got stuck in the Third Moon and is used by the heroes to escape from it. It later ends stuck in the Makai, and the heroes must protect it against enemy attacks.

The Flutter, alongside a Drache, made a cameo appearance in issue 35 of the Archie Comics Mega Man comic series in The X Factor - Part 2. It also appeared in the Rockman DASH manhua and in Rockman DASH 2 4Koma Gag Battle. 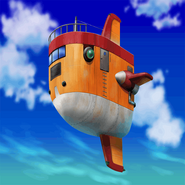 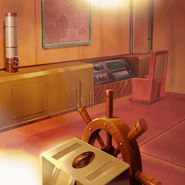 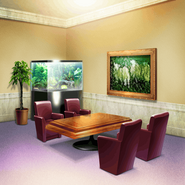 Concept art of the Flutter.
Add a photo to this gallery

Retrieved from "https://megaman.fandom.com/wiki/Flutter?oldid=340108"
Community content is available under CC-BY-SA unless otherwise noted.