Force Metal (フォースメタル, Fōsu Metaru) is a mineral of extraterrestrial origin that has the power to boost the strength and intellect of Reploids, and is a large premise in the plot of Mega Man X: Command Mission. They are generally refined in a small hexagonal form.

Force Metal was discovered in the year 22XX when a meteor landed in the Pacific Ocean. The government was intrigued with its potential, and built the giant island of Giga City near the meteor crash site for the explicit purpose of mining Force Metal, and carry out research and development on its properties and uses. Soon, efforts toward the creation of advanced Reploids that use Force Metal started. However, it has the side-effect of causing Maverick-like symptoms in Reploids who overuse it.

During the Rebellion uprising, a new type of Force Metal, Supra-Force Metal (超フォースメタル, Chou Fōsu Metaru), was created. Supra-Force Metal has 10,000 times more energy than normal Force Metal, requiring "a ton" of Force Metals to be used in its creation. The specifics of what it does exactly have never been expanded upon, but it seems to basically super-power everything about the Reploid who equips it, as evident by the fragments and remarks by the villains.

Supra-Force Metal serves as the primary motivation for both sides after Chapter 7 of Mega Man X: Command Mission, with the Rebellion attempting to use it to prepare a missile warhead armed with it and X's team trying to stop them. Only two samples of Supra-Force Metal are seen, one as the initial warhead payload and the other used by Epsilon. Professor Gaudile mentions that the release of the Supra-Force Metal energy from the missile would have created "a mass of Mavericks" over half of the planet. Eventually, Colonel Redips acquires both samples for himself to build his Great Redips body and begin his attempt at universal conquest. After his defeat, one is destroyed with him and the other by Ferham's self-destruction. Small fragments of the metal are also used by Shadow, Incentas and Botos in earlier chapters.

While only used by the enemies, it's possible to steal two fragments of Supra-Force Metal from Great Redips to use post-game. They are the only Force Metals to have the maximum Erosion rating of 99 and require Erosion reducing equipment to use.

Force Metals can alter the abilities of Reploids who use it, such as increased stats, resistance to certain elements and negative statuses, and so forth. In Mega Man X: Command Mission, it is used as a form of equipment, similar to accessories from other RPGs. Each Reploid can only equip a certain number of Force Metals. X, Axl and Spider can equip the most at four, while Steel Massimo can only handle two. Zero, Marino and Cinnamon can equip three.

Each character has a Force Metal Erosion stat that increases when they level up. The stat varies greatly between characters with Cinnamon having the most and Zero with the least. As long as the combined Erosion rating of the equipped Force Metals equals or is less than the character's Erosion stat, everything is fine. Going over the amount causes Force Metal Hazard, resulting in massive LE or WE Gain cuts in battle, which only become more severe the more the Erosion rating is gone over.

There is a total of 92 Force Metal types in the game, most of which can be bought in shops, obtained from enemies, and created with the Force Metal Generator (once Cinnamon joins).

To refine a Force Metal, Cinnamon needs Force Metal Energy (FME) and the ingredients shown in the recipe, which can include normal items, sub weapons and Force Metals. FME can be obtained by defeating enemies after Cinnamon joins the party, each enemy giving a different amount of FME, like Zenny and EXP. Also, Final Strikes increases the amount of FME obtained after the battle.

Some recipes need to be unlocked first by completing the requirement show in its description, and 15 Force Metals are unrefinable. Cinnamon can also only refine some Force Metals when she reaches a certain level. 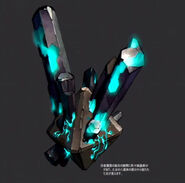 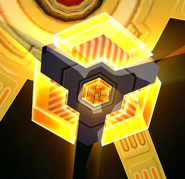 A Supra-Force Metal piece
Add a photo to this gallery

Retrieved from "https://megaman.fandom.com/wiki/Force_Metal?oldid=322121"
Community content is available under CC-BY-SA unless otherwise noted.