This Forum has been archived

I removed those 3 categories because there is really no need for categories for traits. If there was, there would also be a category for unusual heads, robots with 1 arm cannon, and so on... But I saved them here for curiosity:

These Robot Masters have abnormal feet or are lacking feet altogether. Bubble Man was the first Robot Master to exhibit this by having flippers for feet. Later on both Wave Man and Neptune had flippers, but were not used for swimming. Top Man has wheels in his heels. Napalm Man has tank treads for feet. Gyro Man has rails for feet. Blizzard Man has skis permanently attached to his feet. Centaur Man has four robotic hooves. Jupiter, Slash Man and Shade Man all have claws for feet. Only Shade Man uses his claws to grab things. Cloud Man and Astro Man lack feet altogether. Splash Woman has a mermaid tail. Dark Man 1 has no legs and has tank treads. Ground Man has drills on his toes.

Characters with a buster (excluding dual ones like Crash Man, as they are listed above) or a different hand/arm, like Junk Man's claw, Sword Man's sword, ... Should Strike Man's glove count? And launchers like the ones used by Quick Man, Magnet Man, and Ballade?

Robots that can change their arm(s)

This does not include other media like cartoons and manga, as they are different from the games. In Mega Man Megamix for instance, Gravity Man and Star Man can change their arms, and Crash Man has hands. In the pictures below, X is shown to be able to use a buster in each arm in the Mega Mission cards (although it is a combination of X's buster and iX's buster), but it seens he can't use both at the same time in the Rockman X2 manga. 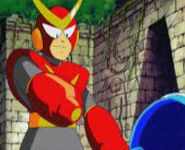 Quick Man with an arm cannon. 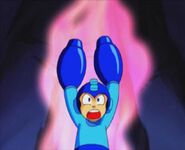 Double Mega Buster! Don't worry about which side his buster is when his sprites change sides.

Double Busters are nothing compared to this!
Add a photo to this gallery

I'll also note the Sniper Joes. As they are based on Proto Man, it's possible they can change their hands, but as there are a large amount of them and in many varieties, it's also possible that some where created with arm cannons for combat while others where with normal hands to use machines.

Most of those have their "heads" with the torso and don't have to worry with wry neck. Search Man is included because he has 2 heads.

Retrieved from "https://megaman.fandom.com/wiki/Forum:Character_traits?oldid=240151"
Community content is available under CC-BY-SA unless otherwise noted.