The Fourth Armor (フォースアーマー, Fōsu Āmā)[1]
Translation:
Alia
Repliroid engineering researcher. Her knowledge regarding Repliroids is top class, and she can design all types of Repliroids and Mechaniroids. Possessing a high-speed CPU, she excels in program analysis and instantaneous data processing. Because of this she was pulled from her job as a researcher in order to become a supporter for the Irregular Hunters. Analyzing the data for X's disposed armor, she was able to create a duplicate. Because the original materials were over 100 years old, they could not be completely analyzed and it was impossible to recreate the armor perfectly. Because it was based on the 4th armor that X acquired, it was named the "Fourth Armor".
Mega Man Network - "Rockman X5 Collected Sourcebook Information". Retrieved on 2011-02-19.</ref>, sometimes referred to as the Force Armor, is an all-around armor first found in Mega Man X4. In its debut game, it it was collected in four parts and slowly became more powerful as the parts were collected, similar to armors found in the previous games.

After the events of Mega Man X4, an imperfect reconstruction of this armor created by Alia[1] can also be used in Mega Man X5. If X is chosen at the Character Select screen at the start of a new game, he will begin the game with the armor equipped, and it will be available for the rest of the game. The second Arm Capsule ability is in effect, enabling the Plasma Shot, but the effects of the Helmet Part are disabled for the duration of the game. The Nova Strike is also unavailable. If Zero is chosen instead, the armor will become damaged in the first stage and the armor becomes unavailable for the rest of the game.

The Fourth Armor made an appearance in the manga version of Mega Man X4. After a bruising fight for his life against rogue Repliforce soldier Frost Walrus where X barely escaped with his life thanks to the General's timely intervention, X decided that he needed more power to defeat the Repliforce and stop their coup d'etat. So he decided to return to the Kagikira Forest where he had earlier defeated Web Spider of the Repliforce Guerrilla Unit and obtained the Ultimate Armor from Dr. Light's hidden capsule there. Although, Light warned him that the armor's power could be a double-edged sword and deeply affect him in unforeseen ways. Thus, X becomes a much more powerful and ruthless warrior.

With the power of the Ultimate Armor, X single-handedly defeats remaining Repliforce sub-commanders Slash Beast and Storm Owl, and is able to defeat the power-hungry Maverick Magma Dragoon as well at a volcano after being ambushed there. Then, X ventures to the Repliforce space station Final Weapon that holds a "Death Flower" weapon capable of decimating the entire planet with a single blast and confronts the General, severely wounding him in combat and knocking him out. But suddenly, Repliforce's deadly weapon is activated by a mysterious yellow Maverick who X had previously encountered at an abandoned laboratory.

X then engages the Maverick in battle, who reveals himself to be none other than Double, X's loyal subordinate. Double than slashes at X wildly and injures him, but he quickly recovers thanks to the Ultimate Armor and smashes right through Double with a Nova Strike, furious with his treachery. Double's body disintegrates. General then rises up behind X who frantically shoots at him with buster shots that do not damage him, but instead of killing X the General hugs him, and then sacrifices himself by slamming his own body into the Death Flower and destroying it.

The explosion reaches X and the force from it causes his Ultimate Armor to explode, which reveals the Fourth Armor that had been hidden underneath it the entire time. X reunites with Zero and they decide to return to Earth, with the war being over and the Earth being saved. 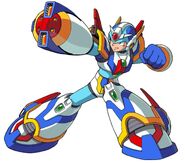 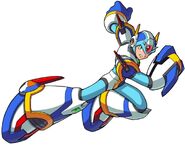 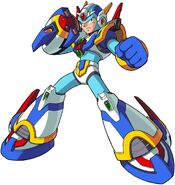 Empty Fourth Armor, as seen on the Parts screen in Mega Man X5.

Mega Man X equipped with all weapons in the armor (with Stock Shot Arm parts) from Mega Man X4.

Mega Man X equipped with all weapons in the armor (with Plasma Shot Arm parts) from Mega Man X4.

Mega Man X equipped with all weapons in the Fourth Armor from Mega Man X5.
Add a photo to this gallery

Retrieved from "https://megaman.fandom.com/wiki/Fourth_Armor?oldid=355907"
Community content is available under CC-BY-SA unless otherwise noted.