Freeze Man (フリーズマン, Furīzuman) is an ice-themed Robot Master from Mega Man 7. He was originally built as a prototype robot for non-polluting energy before being modified for combat by Dr. Wily. Based on the theory that high and low temperatures combined are equal to normal temperature, Freeze Man can split the normal temperature in the ambient into high and low temperatures, using the former as an energy source and the latter to attack with his Freeze Cracker, a snowflake-like projectile.

Although he has a gaudy personality in being an egotistical show-off most of the time, Freeze Man is a perfectionist who likes to make cool and stylish poses in order to impress those who see him. In addition to this, he has great respect for Ice Man, since he is the first ice-themed Robot Master in the series. Freeze Man enjoys reading mystery novels in his spare time and dislikes pollution.

Freeze Man will not attack if Mega Man does not move first, and will taunt Mega Man to pull out the first move. If Mega Man jumps, he will run at Mega Man before starting his attack pattern. If Mega Man shoots, he will immediately start the pattern. First, Freeze Man will attack with his Freeze Cracker. It is avoided by jumping over it, being careful of not being near the edges as Mega Man will freeze upon contact with the ice bits it releases. Next, he will jump and fire a Freeze Cracker to freeze the ground and Mega Man if he is standing there. It is avoided by jumping over the floor when it starts to freeze. Finally, he will use his Freeze Cracker to summon icicles, and then repeats the attack pattern. The icicles will destroy the icy floor, and are avoided by moving out of their way. His weakness is Junk Shield, which will trap him for a short time before he continues attacking. It defeats him in seven hits. The Scorch Wheel is also effective.

Freeze Man is one of the bosses from the Mega Man 7 course.

Freeze Man first appears in a sunken city alongside Bubble Man to assist Virgo. Subsequently, he and Hard Man team up to menace Blues in a jungle region, forcing the lone wolf robot to call in Rockman's team for help.

Translation: Originally a prototype robot for non-polluting energy experiments. Known as the "Icy Fighting Machine," he is even feared by his friends. He is also a great admirer of Ice Man. His special weapon is Freeze Cracker.

Displays the amount of damage in units that Freeze Man will receive from each Special Weapon in Mega Man 7.

*Hitting Freeze Man with the Freeze Cracker will recover his health by 4 units.

Freeze Man is featured in the Archie Comics Mega Man series, debuting in the Worlds Collide crossover arc as part of a large army of Robot Masters in the Skull Egg Zone.

Freeze Man participated in the Battle & Chase disguised as a 4 Roader, and saved Ice Man from Turbo Man.

Freeze Man later appears as one of the Wily Numbers attempting to stop the white robot invading Wily's fortress and assisting in the preparations for final battle against the Stardroids.

Rockman found Freeze Man while searching for Wily, and defeated him.

Back side view of Freeze Man. 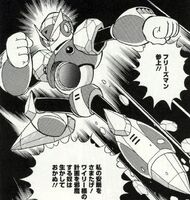 Freeze Man in the Rockman 7 manga.

Freeze Man (leftmost) as seen in the Rockman Gigamix manga 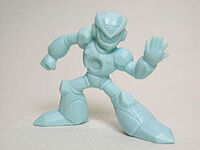