A Friender (フレンダー, Furendā), known as Hot Dog in the Mega Man 2 instruction manual for the U.S., is a blue wolf-like robot from the Mega Man series that was originally created to protect forests. They have a fire extinguisher on their tail, but Dr. Wily modified them to breathe fire. The enemy appears as a mid-boss in Wood Man's stage in Mega Man 2 and Mega Man II, and in the second Wily Tower stage in Mega Man: The Wily Wars. It is weak to Leaf Shield and fully-charged Atomic Fire, as they both defeat it in one hit.

Amount of shots/hits from Special Weapons it takes to destroy a Friender.

Petit Friender (プチフレンダー, Puchi Furendā) is a smaller version of the Friender that appears in episode 1 of Super Adventure Rockman.

Friender appears in the 20th episode of the cartoon Captain N: The Game Master, where he resembles a bulldog. It also appears briefly in Mega Man #9 (being tended to along with a normal Robbit by his master Wood Man), Rockman: Dr. Wily no Inbou, and Rockman World 2. In Rockman Maniax, Doctor Wily attempts to introduce one for his "Doctor Wily's Animal Kingdom" segment, but the Friender ends up scorching Wily with his fire breath. 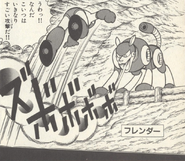