Mega Man 11
Frog Balloon (フロッグバルーン, Frog Balloon) is the sub-boss from Bounce Man's stage in Mega Man 11. It is a famous mascot of the athletic center Boing-Boing Park. It attacks by using its tongue to grab the ceiling swing around, usually landing on the other side of the room, or to grab Mega Man. It'll also try to jump on Mega Man sometimes. Remember to move quick when it lands on the other side of the screen to prevent it from grabbing Mega Man, or if necessary use Speed Gear to help slow down time to make it easier to dodge. When it takes enough damage, Frog Balloon will pop and release Pump Master K (ポンプマスターK, Pump Master K) and three Poyorns. Pump Master K will be dizzy for a moment. After recovering, he will start to pump Frog Balloon back up and then get back inside it when he's finished, restarting the battle. To defeat Frog Balloon, Pump Master K has to be destroyed.

Frog Balloon's weakness is Pile Driver. However, to conserve weapon energy for dealing with Bounce Man, using Blazing Torch with (or even without) the Power Gear is a good alternative, as it helps the balloons pop sooner.

The famous mascot of Bounce Man's athletic center Boing-Boing Park. If it breaks down, Pump Master K will be there to fix it up right away. Unfortunately, its eyes are a little scary and it often makes kids cry. 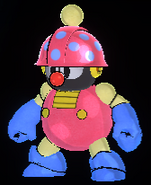 Pump Master K
Add a photo to this gallery
Retrieved from "https://megaman.fandom.com/wiki/Frog_Balloon?oldid=326113"
Community content is available under CC-BY-SA unless otherwise noted.