Frost Shield (フロストシールド, Furosuto Shīrudo) is the Special Weapon that X obtains from defeating Blizzard Buffalo in Mega Man X3. Despite its name, Frost Shield's uncharged form is actually an icicle-like missile that delays before firing. When the shot hits an enemy or obstacle, it ricochets to the ground, forming a three-pronged ice spike that stays on-screen for a few moments before disappearing. If used underwater, the ice missile becomes a little larger and the three-pronged ice spike doubles in size. Up to two Frost Shield ice missiles can be on the screen at a time.

When fully charged, a spiked ice mass forms on X's arm cannon which will damage anything it touches. As its name implies, a charged Frost Shield can also protect X from harm by blocking some projectiles fired at him. If it isn't destroyed after 9 seconds from the time it was created, the shield will dislodge itself on its own, sliding across the terrain until it breaks or disappears. If X air-dashes with the ice mass formed on his arm cannon, it will instantly shatter to pieces. X is unable to fire a charged Frost Shield while any ice spikes from previous shots are still on the screen. When charged underwater, the Frost Shield becomes an ice boulder that floats to the top of the water's surface where it can be used as a platform before shattering to pieces.

Frost Shield also has a secret beneficial effect, like another Special Weapon, Acid Burst: if certain enemies are destroyed by the Frost Shield -- the Tomborts in Neon Tiger's stage, for example -- they will drop health energy capsules, large or small, every single time. This makes it very useful for filling up Sub Tanks when the player does not have the Head Parts chip from the pink capsule in Blast Hornet's stage equipped.

Frost Shield also appears in Marvel vs. Capcom: Infinite. An ice shard will fire upwards temporarily and them move downwards 30 degrees. The move will freeze the opponent. 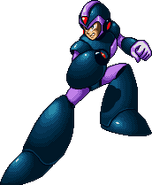 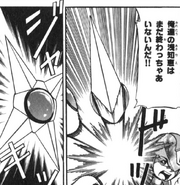 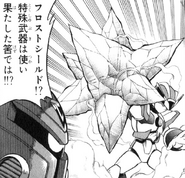