Rumbler of the Far North
(極北の暴れん坊)

"They sent a kid like you after me? I promise to end this quickly..."
―Frost Walrus, Mega Man X4

Frost Walrus was a short-tempered, rowdy Reploid whose destructive behavior got him marked for disposal as a Maverick. However, he was saved when General gave him a chance to join the Repliforce, a military organization of Reploids. Walrus would continue his violent ways, and felt that rampaging through enemies was a military man's duty. When the Great Repliforce War started, Walrus was overjoyed as it was a perfect excuse for him to riot as much as he liked. Walrus was stationed at Repliforce's base in a snowy region and put in charge of guarding their secret weapon under construction. The Hunters eventually found out about the secret project, and dispatched members of their elite team to stop Walrus. Walrus refused to surrender or stop his actions in the coup d'etat, and the Hunters were forced to destroy him in battle for his Maverick actions, his luck finally running out.

Frost Walrus has great physical strength and is able to jump pretty high despite his size.

In battle, Frost Walrus will constantly walk towards the player and attempt to crush them by sliding on the floor. After sliding, Walrus will also launch ice blades that stay on surfaces. Once his health is reduced to half, Walrus will gain a new attack where he creates a large ice block and shatters it, causing spiked ice pieces to spread everywhere. Like other ice-based Mavericks, Walrus is weak to flame-based attacks; X and Zero can respectively use Rising Fire and Ryuenjin at close range to set Walrus on fire, dealing heavy damage in process.

Most bosses show the ability that the player will gain during the battle. For X, his Frost Tower is based on Walrus creating a large icicle that will explode into several shuriken-shaped pieces. Zero's Hyouretsuzan is based after Walrus' raining icicles.

When playing as X

Frost Walrus: They sent a kid like you after me? I promise to end this quickly...

When playing as Zero

Frost Walrus: What's that blonde kid up to?! I don't have time for you junior!

Zero: Hey! Shut up and fight me already!

Frost Walrus had battle quotes in the original Japanese version that were cut from the English one. They are as follows:

Frost Walrus appears as a member of the Repliforce with the same backstory as the game: he was a Reploid with a volatile temperament whose penchant for havoc and destruction led to the authorities to call for his termination as a Maverick. However, General saved him by inviting him to join the Repliforce, sparing him from the fate of being killed. Walrus also aided Zero in a mission to destroy a dangerous artificial sun that had been restarted by Mavericks near an island. After Zero killed some airborne Mavericks while aboard a Ride Chaser, it gave Repliforce field commander Colonel the opportunity to head out and attack the Mavericks on the ground. Walrus aided Colonel in this effort, along with Storm Owl and Slash Beast.

After the Repliforce itself is suspected of being behind an attack by the rampaging Mechaniloid known as Eregion, the organization's troops are forcibly disarmed in many areas by angry humans. General decides to rebel against the human government as a result and become independent, and Frost Walrus is standing on the stage when General gives his speech.

He was visited in the Repliforce snow base by Colonel, who berated him for causing unnecessary riots that were unhelpful to the Repliforce's plans. During one such incident, he killed an entire squadron of Maverick Hunters and kept their bodies frozen in ice as part of a collection of his victims. Walrus has kept an ice collection of his victims where those who survive more than 20 seconds are "rewarded" by being frozen in ice containers instead of being destroyed outright. Colonel informed him he will report his behavior to General, and that he should cease such wanton destruction in the future.

In a fit of anger, he released dozens of Reploid prisoners and told them to run as fast as they could, all so he could hunt them down and later killed all of them for sport. However, one was saved by X and Blizzard Buffalo, the latter of whom had become reformed as a Maverick Hunter. Frost Walrus proved to be more than a match for the two Hunters and easily overpowered them both. Throughout the entire battle, Walrus remained stationary and did not even have to take a single step to battle against them. X noted this in shock before he was ruthlessly impaled on Walrus' shoulder blade, causing him to lose consciousness. Blizzard Buffalo then stepped in to defend X. After X awoke, he discovered Buffalo was dead, impaled by a large icicle.

After preparation, the enraged and grief-stricken X rushed to the Snow Base and confronted Frost Walrus in a modified Eagle Ride Armor, where he infuriated Walrus by destroying his collection of Reploid victims encased in ice. Even though Frost Walrus quickly destroyed the Ride Armor with a Frost Tower, X still managed to heavily damage him by setting him ablaze with the Ride Armor's damaged fuel tank. Despite all this, Frost Walrus again gained the upper hand and attempted to kill X. Before he could kill X, Walrus froze as General had arrived the scene, staring at him. Walrus was then executed by General, who personally shoots him in a single blast as a punishment for his previous misconduct and to save X's life.

Frost Walrus appeared in Archie Comics' Worlds Unite crossover between its Mega Man, Sonic the Hedgehog, Sonic Universe, and Sonic Boom lines, which also guest-starred the Mega Man X series and other Sega and Capcom franchises. He was revived by Sigma and employed as part of an army to attack various worlds. 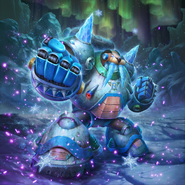 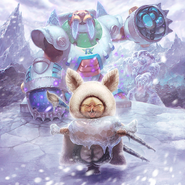 Frost Walrus in Worlds Unite
Add a photo to this gallery

Retrieved from "https://megaman.fandom.com/wiki/Frost_Walrus?oldid=356193"
Community content is available under CC-BY-SA unless otherwise noted.