High-Voltage Robot and Master of All Things Power

Fuse Man (ヒューズマン, Hyūzuman) is a Robot Master who appears in Mega Man 11. Originally created to manage electrical equipment in a power plant, he was reprogrammed by Dr. Wily to fight against Mega Man. He is able to freely manipulate high voltage currents and move at lightning speed, being able to instantaneously get on an opponent's blind spot and emit electric attacks. When he activates the Speed Gear installed by Dr. Wily, he gains a speed boost and becomes as fast as lightning. His Special Weapon, Scramble Thunder, allows Mega Man to launch a sphere of electricity that will cling onto solid surfaces and can be controlled in any direction.

Fuse Man is a tall slender robot with a black skin-tight suit that is protected by yellow and blue armor. His helmet is also yellow and has two electric fuses that stick out from its sides, somewhat resembling horns. A lightning bolt symbol is also engraved on each of Fuse Man's boots. In addition, a green circle is engraved on Fuse Man's left chest plate, and yellow spikes protrude from the sides of Fuse Man's lower torso. Additionally, Fuse Man sports a frown face to reflect his stoic and stern nature.

With an alert and on-edge disposition coupled by his electrifying nature, Fuse Man uses his electric-based powers to attack his opponents at lightning-fast speed. The character is also bit of a show-off, moving at the speed of light to demonstrate his agile prowess after activating his speed gear. Just like the other Robot Masters in the game, Fuse Man enjoys making puns related to his elemental powers even before his defeat. As an essential part of keeping the electrical power grid in check, Fuse Man has a sense of responsibility in doing his job. He is also shown to have a liking to animals, most specifically his pet rabbit "Watt". In fact, tending to his pet rabbit is the only time Fuse Man can relax as his job requires him to be alert 24 hours a day and 7 days a week, as his description reveals.

Fuse Man's attack patterns are simple, but the battle can be very difficult due to his incredible speed. He will begin by casting two balls of electricity, one on the ground and the other on the ceiling. As he's doing this, Fuse Man will create an electrical barrier around his body. This makes him invulnerable for a short time which prompts Mega Man to wait for him to proceed with his set-up before he can damage him. Afterwards, Fuse Man will teleport above Mega Man and cast his Scramble Thunder towards him at very high speeds as the electric spheres will begin to move around the room on a metal rail in a clockwise motion, forming a rectangular shape. His Scramble Thunder can be avoided by sliding out of the way, but caution must be taken as one of the electric spheres can also come around to damage Mega Man as he dodges the projectile. Sometimes, Fuse Man will wait a second or so after he teleports before firing his weapon to set a trap, making it so that Mega Man will have to evade both his Scramble Thunder and the electric spheres at the same time. The Speed Gear can be utilized here as it makes dodging much easier, but the Power Gear may prove problematic because while it can quickly shave off Fuse Man's health, it holds Mega Man in place once he fires a double Charge Shot, increasing the chances of him getting damaged. Fuse Man will continue this pattern until he loses half of his health.

Once Fuse Man is at half health, he will teleport to the middle of the room in midair to activate his own Speed Gear. When activated, his speed is increased immensely and his attack pattern changes. His new method of attack is to teleport to the top of the room and slam back down to damage Mega Man with a powerful electric strike, imitating the movements of an actual lightning bolt. Before slamming down, a silhouette of Fuse Man will appear in the place he will strike at, giving the player an indicator of when to dodge. These attacks are extremely fast and difficult to dodge, making the Speed Gear the best way to go here unless one is skilled enough without it. Fortunately, Fuse Man will only do this several times until he stops and goes into his third phase.

In his third and final phase, Fuse Man will revert back to his original attack pattern albeit with some small changes. Instead of casting one shot of Scramble Thunder, he will fire two at different trajectories to increase the likelihood of Mega Man getting damaged. Additionally, the electric spheres will move in somewhat triangular shapes where they now move in the same direction as each other and intersect at the middle of the room. Fuse Man will eventually be defeated with good timing, patience and great use of the Speed Gear. However, if Fuse Man isn't defeated in time during his final phase, he will revert back to phase two, activating the Speed Gear again and attempting to damage Mega Man with his lightning strike attacks.

Fuse Man is weak to Bounce Ball. and due to it's rebound capability, it can reach Fuse Man without the need to aim it directly at him. Furthermore, the Bounce Balls fired by Mega Man will also destroy the balls of electricity tracing the room as well as Fuse Man's Scrambler Thunder projectiles if contact is made.

In the Superhero difficulty, Fuse Man will create four balls of electricity at the start of the fight instead of two, and he will fire two sparks after every teleport, instead of the standard one. He will also move slightly faster when activating his Speed Gear attack.

Fuse Man appeared as an event character in the game Yuusha no Kuse ni Konamaiki da DASH!, where he is a Dragon type monster. His Active Skill is Scramble Thunder.

Fuse Man's job is to manage and fine-tune power transformer stations. He's designed to handle massive electrical currents, but if he ever encounters a current that's too strong for him, the fuses on his head will blow, saving him from a critical overload.

He's a crucial part of the city's power supply system, so he treats his job with a sense of responsibility and duty, putting speed above all else when a problem arises.

Since his dangerous job keeps him alert and on edge 24/7, the only time he can let caution slide and just relax is when he's caring for his pet rabbit "Watt".

Fuse Man appeared in the Rockman 11: Unmei no Haguruma!! manga. 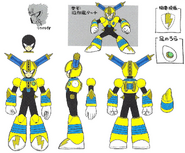 Fuse Man in the Rockman 11 manga